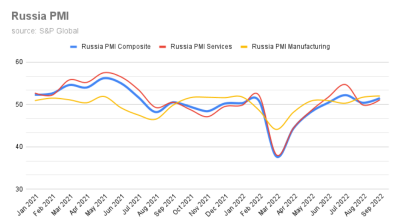 “The rise in output was historically subdued, but growth nonetheless reportedly stemmed from a further uptick in client demand and new orders. September saw a fourth successive monthly upturn in new orders. Greater client demand was reportedly driven by the acquisition of new customers, but was supported mainly by the domestic market as new export orders fell again. Foreign customer demand decreased at a sharp pace that accelerated notably from August,” S&P said in a note. Any number above the no-change 50 mark represents an expansion. (chart)

The growth in the services sector comes on top of an even stronger expansion in manufacturing as Russian firms scramble to replace imports that have disappeared from the market.

The Russian manufacturing sector signalled a modest improvement in operating conditions in September, according to S&P Global, which put the seasonally adjusted S&P Global Russia Manufacturing Purchasing Managers’ Index (PMI) at 52.0, rising from 51.7 in August. “The latest data signalled a modest upturn in the health of the Russian manufacturing sector, and one that was the fastest for three and a half years,” the report said on October 4.

As covered by bne IntelliNews, previously in August the manufacturing PMI showed the strongest improvement in the health of the sector since the launch of Russia's military invasion of Ukraine. But despite a renewed expansion in manufacturing production, broadly unchanged levels of output at service providers weighed on the overall expansion.

Taken together, the services and manufacturing PMI for September in the Composite PMI Output Index posted 51.5 in September, up from 50.4 in August, to signal another monthly upturn in private sector business activity.

Despite the extreme sanctions imposed on Russia following the invasion of Ukraine in February Russia’s economy has performed better than expected and the contraction for this year has been downgraded from 8%-15% to somewhere between 4% and 6%, according to various estimates. Services have been the last of the major categories to recover.

“Business activity across the Russian service sector returned to growth in September, according to the latest PMI data. The rise in output was only marginal, however, as new orders growth eased to the slowest in the current four-month sequence of expansion,” S&P said.

“Client demand remained domestic focused as sanctions continued to restrict demand from external customers. The resulting relatively muted increase in new business led to decrease in employment, as backlogs of work declined further amid reports of excess capacity. Nonetheless, business confidence picked up, due in part to hopes of further upticks in customer demand over the coming months,” S&P added.

Despite the problems, unemployment remains at a historical low of 3.9% in August and September. (chart) The decline was often attributed to the impact of sanctions on business operations. The rate of contraction was steeper than the series average. In line with relative muted demand conditions, firms reported a reduction in employment for the second successive month during September, S&P reports.

The pace of job shedding quickened from August and was the fastest since May, albeit being only slight overall. The decrease in employment was in line with signs of spare capacity, as evidenced by a further decline in backlogs of work in September.

Inflation remains high, but thanks to the quick response of the CBR in the first days of the war inflation peaked in April and has fallen in the last few months. However, economists are expecting it to rise again towards the end of the year as new sanctions on fuel exports come into play. (chart)

“The average cost burdens rose at a softer, but still marked, pace. Although slower than rates seen earlier in the year, the increase in selling prices quickened as firms sought to pass through higher costs to clients,” S&P reports.

Cost pressures eased in September, with the rate of input price inflation the slowest for a year, reports S&P. “Nonetheless, the pace of increase was historically elevated and price hikes stemmed from greater material, supplier and wage costs. Some firms also mentioned that exchange rate factors exacerbated increases in cost burdens.”

The increase in selling prices was the sharpest for four months and above the series average, says S&P.

Russian businessmen remain confident in the near term. Business confidence at Russian service providers ticked higher at the end of the third quarter.

“Expectations regarding the outlook for activity in the year ahead were the second strongest since February amid hopes of increased client demand. That said, the degree of optimism was below the series trend as concerns regarding economic and political uncertainty weighed on sentiment,” says S&P.