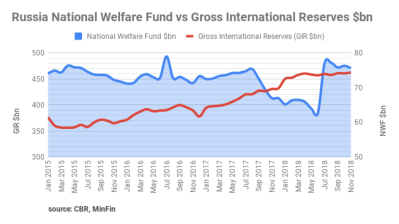 Despite all of Russia’s sanction travails it has managed to add $9.6bn to its GIR YTD and $3.4bn to the NWF.

The Central Bank of Russia (CBR) has been aiming to increase Russia’s reserves to $500bn, but since the threat of new “crushing” sanctions that may be imposed on Russia after the holidays, it has abandoned this policy for the meantime as it battens down the financial hatches in the face of possible instability if the US goes for the nuclear option of targeting Russian sovereign bonds.

The growth in reserves has been helped by a large current account surplus thanks to higher than expected average oil prices this year.

The current account surplus quadrupled to $87.9bn in January-October 2018 compared to the same period in 2017, the central bank said on November 13.

Russia is also running a 3% of GDP budget surplus, although this is expected to fall to 2.2% by the end of the year as December is a month of heavy government spending. Russia Inc is currently in profit as although oil prices are lower than in the boom years, after extensive reforms and cost cutting the breakeven price needed to balance the budget has fallen to $53 whereas the average price of oil for this year has been circa $70.

Finally, in another move to protect the country from possible sanctions Russia has been selling off its holdings of US Treasury bills and building  up its gold reserves, having added $2.5bn to the reserves in the course of this year to bring gold reserves to an all time high of $82.9bn in November. Gold now accounts for 21.9% of all Russia’s reserves, up from 15% in January 2015.

Croatia to be among countries worst hit by tourism collapse this year, says UNCTAD
22 hours ago
Russians, Serbians, Turks the biggest property buyers in Montenegro
1 day ago
Polish PMI advances but remains below 50 points as restrictions lifted
1 day ago
Czech PMI slightly up in June but still under 50-point threshold
1 day ago
Russian corporate profits recovering, but still down by half on 2019 in April
2 days ago