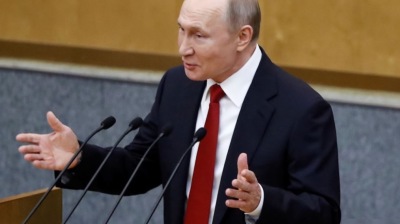 Russia's President Vladimir Putin could push out his signature National Projects investment leap worth over $400bn from 2024 to as far as 2030 owing to the pressure from the coronavirus (COVID-19) crisis.

As followed by bne IntelliNews, the National Projects spending spree was prepared shortly after Putin's re-election in 2018, a reworking of his previous economic platform of the May Decrees.

The Kremlin has just secured Putin's possible re-election for two six-year terms in 2024 in a constitutional referendum, but risks running up to his re-election without having fulfilled the previous economic platform.

“I ask the government with the participation of the State Council to adjust the national projects within three months,” Putin told the government on July 13, as cited by Bloomberg. “We must proceed from their realities,” he stressed.

Prime Minister Mikhail Mishustin reminded that “we will have to work in conditions of stricter budget restrictions” due to the coronavirus, and suggested extending the deadlines on the National Projects from 2024 to 2030.

Mishustin himself was seen as a key figure in driving the National Projects to completion. A trusted technocrat that previously revamped the Federal Tax Service (FTS), Mishutin replaced long-term Putin proxy Dmitry Medvedev, who did not succeed in kick-starting the spending programme in 2019.

As reported by bne IntelliNews, the National Recovery Plan adopted by the government against the COVID-19 crisis (partially overlapping with National Projects) sees spending of RUB8.7 trillion ($123bn) in two years. The federal government could run a budget of over 5% this year, and a recession of 4.5-6.5% is expected.

Previous reports suggested that Mishustin's government and swift implementation of the National Projects was Kremlin's bet on sparking an upturn in the economy and boosting living standards in time for the authorities to claim credit at the upcoming State Duma and regional elections.

The upset of these plans coincides with a notable upsurge in arrests and repressions seen as politically motivated, with some of the largest protests in recent years already erupting in Russian regions.