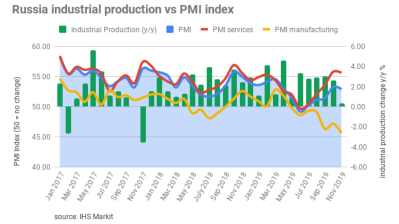 The Russia Composite PMI index posted a modest but still positive 51.8 in December, down slightly from 52.9 in November. Services epxanded strongly by 53.1 while manufacturing contracted by 47.5 in December. / bne IntelliNews
By bne IntelliNews January 4, 2020

The IHS Markit Russia Services Business Activity Index slowed somewhat in the last month of 2019 to post 53.1 in December from 55.6 in November, but was still well ahead of the 50 no-change mark.

The latest figure signalled a solid, albeit slower rise in business activity. Russia’s services PMI was doing well for most of 2019 as Russia switches from a manufacturing economy to one that is lead by services.

Firms stated that the upturn was linked to greater client demand, although some mentioned that greater competition had led some customers to delay orders as the year came to an end.

Nonetheless, strong expansions in October and November helped support the best quarterly performance of the services sector since the opening three months of 2019.

The seasonally adjusted IHS Markit Russia Manufacturing PMI, on the other hand, continued to underperform as the real economy splutters in the face of stagnation and manufacturing fails to gather any momentum.

The manufacturing PMI posted 47.5 in December, up from 45.6 in November, which was the worst result in a decade. Although December's decline in manufacturing was the slowest since August, the quarterly average for the final three months of 2019 indicated the weakest manufacturing performance since 2009.

Taken together, the Russian composite PMI was lifted by the strong service sector results as usual. The Russia Composite PMI index posted a modest but still positive 51.8 in December, down slightly from 52.9 in November.

The rate of growth in December was only modest following a further contraction in manufacturing output and a slower pace of growth in service sector activity. The overall expansion was the softest since September.

In contrast, new business growth picked up at the end of 2019. The overall upturn quickened from November amid a faster increase in service sector client demand and a slower fall in manufacturing new order volumes.

The economic slowdown in Europe was felt in Russia where new export business continued to contract, albeit at the softest pace since July.

Private sector firms registered a further rise in employment in December, driven by greater workforce numbers at service sector firms. The fractional increase helped to reduce pressure on capacity, as reflected in a drop in outstanding business.

Although cost pressures intensified in December, firms were only able to partially pass increased input prices on to clients through higher selling prices, with the rate of charge inflation easing to only a marginal rate. Russia finished 2019 with modest inflation of 3.5%, which is well below the Central Bank of Russia (CBR) 4% target rate and is expected to fall further in 2020.