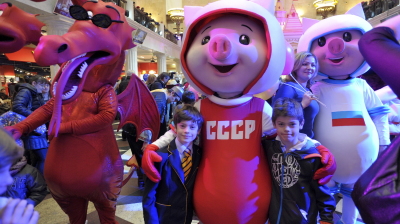 Russia’s leading children’s store Detsky Mir plans to open 30-50 stores in Belarus in the next 3-4 years
By bne IntelliNews April 10, 2019

Russia’s leading children’s store Detsky Mir plans to open 30-50 stores in Belarus in the next three to four years, management said in a note on April 10.

Belarus’s economy is continuing to make progress and as a middle class emerges the leading retail companies – both domestic and regional – are expanding.

Russia’s biggest children store has decided it's time to move into the market of its smaller neighbour and says it will open 30-50 stores in the coming years, that will represent 11% of its overall expansion plans, according to management.

“The roll-out in Belarus is a new growth pillar for the company and the announced targets represent 11% of the net openings in our model for the next three to four years. The Belarusian market is strategically interesting for the company due to the low level of consolidation and the fact that the Detsky Mir brand is well-known in the country. In total, the children’s goods market in Belarus is worth $600mn per annum, while per capita spending is $6,306, compared with $8bn and $11,327, respectively, in Russia,” VTBC said in a note.

As bne IntelliNews reported with “The long march of Belarusian retail” in September 2018, the retail market has reached a size that will support organised retail and chains, especially in the supermarket subsector. The real disposable money income of Belarusians rose by 8.1% y/y in January-October 2018, the National Statistics Committee of Belarus reported on December 18 and is expected to continue rising. The domestic supermarket chain Eurotorg (aka Euroopt) twice tried to IPO in London last year and is expected to try again this year.

Detsky Mir, which is part owned by multi-industry conglomerate AFK Sistema has a 23% market share of the children’s goods market in Russia, while the largest player in Belarus, Buslik, holds 11%.

“We think Detsky Mir offers an appealing combination of organic growth and dividend payments. In our model, we arrive at a 2019-23F sales CAGR of 14% (in RUBterms) and forecast a 12-month dividend yield of 11%. Detsky Mir trades on 2019F EV/Ebitda of 6.4x, a 10% discount to the global children’s goods median. The uncertainties about Sistema’s potential exit from the share capital (it has a 52% stake) is capping the share price performance at the moment, in our view, and a clearer outlook could trigger a rerating," VTBC analysts said.

Sometimes called the “Hamleys of Russia” the iconic Russian children's goods chain posted 14% year-on-year growth in revenues in the 4Q18, supported by 89% y/y expansion of online sales that accounted for 8% of total top line. Detsky Mir posted 18% y/y Ebitda growth in the reporting quarter, with 2018 Ebitda doubling year-on-year, however, partly attributed to the adoption of IFRS16 accounting standards.  The management of the company mentioned that it will recommend distributing the entire RUB3.3bn of 4Q18 RAS net income as a dividend, implying a 5% dividend yield for the 4Q18 payment alone.