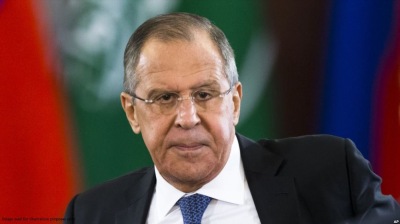 Russian Foreign Minister Sergei Lavrov gave a chilly reception to the formal written response from the US to the Russian Foreign Ministry’s eight-point list of demands issued in December, but held the door open for more talks. / wiki
By Ben Aris in Berlin January 27, 2022

“There is no positive reaction on the main issue in this document. The main issue is our clear position on the inadmissibility of further Nato expansion to the east and the deployment of strike weapons that could threaten the territory of the Russian Federation,” Lavrov said as cited by RIA Novosti.

Washington delivered the written response required by the Kremlin on January 26 which included a “no” to the MFA’s key demand of negotiating legal guarantees of no further Nato expansion to the east, and specifically a ban on Ukraine’s membership.

The MFA has made it clear that the list of demands comes as a package and there could be no progress without concessions on the No Nato Expansion article.

Lavrov also complained that the White House was “cherry-picking” from the agreements that contain the two protagonists' obligations, and in particular deals signed within the framework of the OSCE. The nub of the argument between Russia and the US is over the two conflicting standpoints contained in treaties they have both signed: that a country has the sovereign right to choose which military alliances to join; and that right is limited if the alliance impinges on the security of a third country.

Moscow argues that the US insistence on maintaining its “open door” policy for Ukraine’s possible membership of Nato violates Russia’s security interests and so should be banned. Russian Deputy Foreign Minister Sergei Ryabkov has previously likened Ukraine’s membership of Nato to the 1962 Cuban Missile crisis.

“It is significant that now, when our Western colleagues react to our proposals to agree on legally binding guarantees in the Euro-Atlantic, they always call for the implementation of the agreed principles regarding the security architecture in the Euro-Atlantic. They immediately say: this means that Nato has the right to expand, no one has the right prohibit Nato members from considering appeals from any other country," Lavrov said.

“I warned [Blinken], as well as our other colleagues, that in the very near future we would send them a formal request to explain why they were pulling out only one clause from their own obligations, and they were trying to ignore the conditions for compliance with this favourite clause for them,” Lavrov added citing the Istanbul and Astana declarations that contain these conflicting points.

Lavrov also pointed to the root of Russia’s complaint with the expansion of Nato that began in 1999, bringing up the verbal promises made to Gorbachev in February 1990. Putin has also often referenced these promises and clearly intends to try to force the West to honour those pledges, but this time to get them on paper.

"If they explained to us about the 1990s by the lack of written commitments on the non-expansion of Nato. Now we have these written commitments. They have been confirmed within the OSCE more than once, including at the highest level," Lavrov said during a press conference.

However, Lavrov held the door of diplomacy open and said that he would hold more talks with US Secretary of State Antony Blinken “in the next few days.”

Blinken said during a press conference the previous day that he hoped discussions would continue, “after Moscow has had a chance to read the paper and is ready to discuss next steps.” Blinken said in his briefing that the US had not compromised on its “core principles” and made it plain that the “open door” policy for Nato membership was one of those. He also said that the US had drawn up a list of issues that were of equal concern to Washington, but added that he had also laid out in general a road map for the two sides to work on where there is clearly some common ground such as re-introducing arms control deals and a joint fight against cybercrime.

Lavrov welcomed the constructive suggestions in the letter and said the letter “allows us to expect the start of a serious conversation but on secondary issues. On the main question, there’s no positive reaction in this document,” Lavrov said, as cited by Interfax.

Russian presidential spokesman Dmitry Peskov said that President Vladimir Putin has read the US letter and will take time to study it, but “it cannot be said that our views were taken into account, or that a readiness to take our concerns into account was demonstrated.”

Peskov said it would take time for Moscow to review the US response and that “it would be silly to expect a response on the next day.”

Blinken told reporters in a press briefing that the US′ response also offered Russia “a serious diplomatic path forward, should Russia choose it.”

“We’re open to dialogue, we prefer diplomacy, and we’re prepared to move forward where there is the possibility of communication and co-operation if Russia de-escalates its aggression toward Ukraine, stops the inflammatory rhetoric and approaches discussions about the future of security in Europe in a spirit of reciprocity.”

How exactly Moscow will react to Washington's actions, according to Lavrov, will be determined personally by Putin, who has yet to comment.

Peskov also commented on the Normandy Four talks that were restarted in Paris on January 26 and said their outcome was “positive” despite the fact that little progress was made.

Top Kremlin aide Dmitry Kozak led the Russian delegates in the eight-hour long “audit” of the Minsk II agreement that was designed to bring peace to the undeclared war in Ukraine’s eastern Donbas region.

The meeting broke up with little concrete action taken but the two sides agreeing to resume talks in two weeks in Berlin.

This was the first time the group had met since a top level Normandy Four summit was held in Paris in December 2019, the first time that Ukrainian President Volodymyr Zelenskiy met Putin in the flesh. German Chancellor Angela Merkel and French President Emmanuel Macron were also present at the meeting.

After such a long hiatus, "nobody actually expected or could have expected any breakthrough understandings or actions [from the recent meeting]," Peskov said of this week’s meeting. But in his opinion, "it is quite good that the participants seek to bring their understanding of the contents of the Minsk Agreements to a common denominator."

"Although, it’s quite paradoxical. You see, the languages in this text are not convoluted, they are extremely specific, clear and were formulated to rule out double understanding," Peskov said as cited by Tass.

"Of course, we have yet to analyse, how we ended in a situation when several sides – participants to the Minsk [negotiations] process – have a different understanding of extremely clear and precise language," the spokesman said. "But there is a silver lining: it is good that they seek to find a single understanding."

The key unresolved dispute is that the Minsk II agreement calls for the Donbas to be recognised as an autonomous region within Ukraine. The appeal of this for Russia is that, after handing out some 600,000 passports to locals, the Kremlin would have de facto, if not sovereign, control of the region and thus a veto on any referendum on Nato accession organised by Kyiv.

While a less elegant political solution on excluding Ukraine from Nato than an “ironclad legal agreement” with Washington that it would never vote for Ukraine’s membership, making Donbas autonomous would have the same effect and is a possible solution to the current stand-off.