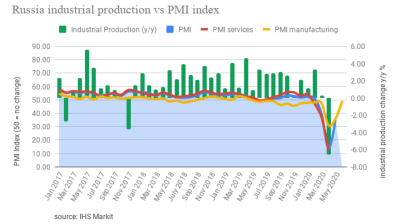 Russia’s June manufacturing PMI bounces back to 49.4, recovering almost all the ground lost in the coronacrisis / bne IntelliNews
By Ben Aris in Berlin July 1, 2020

The June result is up from the deep contraction in manufacturing of 36.2 in May.

The manufacturing PMI plunged to 31.1 in April as Russia’s economy came to a standstill as the coronavirus (COVID-19) epidemic got underway and the country was put on lockdown. It recovered somewhat in May to 36.2, but that was still a very deep contraction.

At the same time, the services PMI crashed to an 18-year all-time low in April, a stunning 12.2, as restaurants, hairdressers and other services simply stopped working for two months. Services bounced back in May to 36.2 as the population got used to the restrictions.

Taken together, the IHS Markit Composite PMI Output Index posted 35.0 midway through the second quarter, up from April's record low of 13.9, but was still deeply in the red.

June’s manufacturing result is encouraging as the forward looking indicator, based on interviews with hundreds of firms, suggests the worst of the crisis is over. The services index will be out in the next few days and will almost certainly show a similar bounce-back, although it will likely also show that services also contracted in absolute terms.

“The latest figure signalled only a fractional decline in manufacturing sector performance, and one that was the slowest since May 2019,” Markit said in a statement.

Output and new orders have returned to growth in June after Russia’s lockdown came off at the start of the month. The renewed increase in client demand was only fractional, however, as customers gradually resumed operations following the coronavirus (COVID-19) outbreak, according to Markit.

Responding to the collapse in demand, manufacturers had been sacking workers in the last two months, but the fall in employment slowed in June as the market stabilised. However, the number of registered unemployed has risen 3.5-fold since April, according to Prime Minister Mikhail Mishustin, to 6.1%, up from around 4.4%-4.6%% in recent years.

“Despite growth in new orders, manufacturers continued to cut workforce numbers at the end of the second quarter amid signs of spare capacity and historically muted demand. Companies highlighted that redundancies and the non-replacement of employees were behind the solid fall. At the same time, backlogs of work were reduced further,” Markit said.

Business confidence has also picked up amid hopes of greater client demand in the rest of this year, although the majority of businesses see this year as being a lot worse than last year.

Two-thirds of Russia’s entrepreneurs see the outlook for the Russian economy as negative, according to a survey included in Presidential Ombudsman for Business Boris Titov’s annual report, TASS reported.

“Two-thirds of respondents (68.3%) negatively estimate the state of the Russian economy,” the research said. Particularly, 52.2% of respondents described it as ‘problematic’, while 16.1% said it was ‘disastrously recessionary’.

As many as 15.1% of respondents considered the Russian economy stable, whereas 3.5% referred to its state as ‘good’. The remaining 13.1% of participants were undecided.

The Markit poll is a good sign, as it is forward-looking and suggests that some optimism for a recovery in the rest of the year is returning.

Inflation has been another concern but here the news is a lot better. While inflationary pressures spiked following a circa 20% devaluation of the ruble during the worst of the crisis months, that effect has been offset by the collapse in demand and the fall in retail sales turnover as a result of the lockdowns.

Russia's consumer price inflation (CPI) decelerated to 0.3% month on month in May 2020 from 0.8% seen in April, according to the latest data from Rosstat statistics agency. Annual inflation moderated to 3% in May from 3.1%, well below the Central Bank of Russia (CBR) target rate of 4%.

As reported by bne IntelliNews, inflation spiked in April, but the price growth stopped in May allowing the CBR to start an aggressive monetary easing cycle that resulted in a 100bp rate cut in June to an all-time low prime rate of 4.5%.

Markit’s respondents confirm that price pressures remained soft as bottlenecks in supply chains were loosened and supplier stocks were rebuilt.

“Supporting the softer overall contraction was a renewed expansion in production in June. Although only moderate, the rate of growth was the sharpest since April 2019 as factories reopened and firms returned to work. A number of firms stated that higher output was due to the processing of orders made before the pandemic escalated, while some highlighted increased client requests,” Markit said.

New orders rose only fractionally in June, but nonetheless signalled a marked turnaround from the substantial contraction seen in May. The upturn in client demand was linked to the reopening of customer businesses.

In contrast, new business from abroad continued to decrease at the end of the second quarter, Markit reports. The downturn in new export orders was sharp overall, despite the rate of decline having eased to the softest in three months.

Despite the depressed demand and low exports, manufacturers registered the strongest degree of optimism for five months as they passed through the bowl of the crisis. Hopes of further client requests and new customer acquisitions drove positive sentiment.

“Finally, the contraction in input buying eased in June, as some firms noted an uptick in purchasing following the reopening of many factories. Both pre- and post-production inventories were depleted further as companies used stocks to fulfil new orders and backlogs of work,” Siân Jones, economist at IHS Markit, which compiles the Russia Manufacturing PMI survey, said.