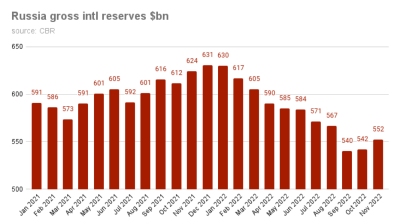 Russia’s international reserves are up by $10bn in the first week of November to $552.1bn as Russia's trade recovers and it continues to earn huge current account surpluses. / bne IntelliNews
By bne IntelliNews November 19, 2022

The total includes the circa $300bn frozen in Western central banks at the start of the war in Ukraine in February.

Russia’s reserves are continuing to rise as its trade recovers from the shock of the massive sanctions package imposed following the invasion of Ukraine in February.

Russia’s current account surplus showed some increase in October, reaching c$17bn v c$15bn in September, according to the CBR. This stronger figure was driven by higher Urals prices ($70.62 per barrel in October v $68.25 per barrel in September), which supported export flows, and by a contraction in imports as a result of subdued household consumption.

Russia’s exports are recovering too. Despite the sanctions, Russia’s exports to the EU – mostly energy and raw materials – are on course to increase this year compared to exports a year earlier, largely due to the hefty increases in the cost of oil and gas.

At the same time, after crashing shortly after the war started, trade with China has recovered and reached a new all-time high, replacing European countries as Russia’s biggest trade partner.

Russia is also running healthy trade surpluses with its neighbours in the CIS, where trade turnover is also growing. Trade within the Eurasian Economic Union (EAEU), a trade bloc that includes Russia, Armenia, Belarus, Kazakhstan and Kyrgyzstan, in 2021 amounted to $72.61bn, of which Russian exports to the EAEU member countries amounted to $45.3bn. Over the first seven months of this year that had increased to $74.2bn, meaning a compounded 2022 total could reach $127.2bn, with Russia’s exports achieving about $99.6bn of this. That will indicate increases of $54.59bn in volume and $54.3bn in exports over the year.