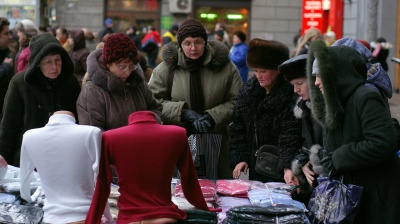 Russian imports have collapsed but the share of imported goods in shopping baskets has remained the same. / Via CC
By Ben Aris in Moscow April 6, 2016

"We and most other observers had looked forward to the publication of the structure of 2015 GDP by production by Rosstat in order to see whether import substitution had happened last year," Alfa Bank's chief economist Natalia Orlova wrote in a recent note. "Unfortunately, the answer was 'no'."

Russia's retaliatory sanctions imposed on European agricultural products, and more recently nearly anything made in Turkey, have driven food prices through the roof and stoked a problematically high level of inflation last year. But it was supposed to have the benefit of encouraging import substitution and giving Russia manufacturing and small- and medium-sized enterprise (SME) sectors a fillip. It seems none of that happened and the only tangible results has been a smaller selection of more expensive, but lower quality products to choose from for the average Russian shopper.

Arguably the only gains from the sanctions were made in Russia's agricultural sector, which was the only sector to grow in 2015, expanding by 3.1 % y/y. While the leading conglomerates have been earning extraordinary profits, the overall share of the agricultural sector has remained the same – 3.5% of GDP, reports Alfa – and still close to the 3.2% of GDP it has been for the last five years.

Indeed, the overall structure of the economy has barely been affected by the sanctions and tumbling ruble. While imports have tanked over the last two years, tumbling by 42% y/y in 2013-15, the make-up of imports has barely changed: these remained at the same 38% of total consumption level they have been at for years. In other words, Russians have not changed what they buy, only the amount of those things they buy.

The CBR at its regular press conference in March gave another illustration of the paltry scale of the import substitution.

"According to the regulator, the share of the imports in local retail consumption has declined to 38% from 43-44% in 2012-2013. While the monetary authorities interpreted this as an illustration of gradual import substitution, we see it as negative news," says Orlova. "This figure suggests that the strong 57% nominal (46% in real terms) ruble depreciation failed to bring a structural shift in the real sector. Despite import contraction from $21.0bn in January 2014 to only $9.7bn in January 2016, its share in GDP has remained at 21% of GDP, the same as in 2011-13."

Why is this? One of the depressing possibilities is that substitution is not happening, as there is nothing to substitute the imports with. Despite the rhetoric on doubling the share of SMEs in the economy by 2030, SMEs still only account for about 20% of GDP, compared with world leader Germany's Mittelstand, which account for 99% of all German companies and a massive 68% of exports. (On paper Russia aspires to become a new Germany and much of its legislation is based on German law.)

Red tape and bureaucracy make it so difficult to set up a successful small business that despite the opportunity created by sweeping imports out of the market, this has lead to few small Russian businessmen grabbing the bull by the horns to go further into business.

According to a recent survey by the Gaidar Institute, some 60% of Russian producers claim that there are simply no local substitutes for the inputs they need for production and even if they do exist, they are of such bad quality they can't be used in production.

The World Bank estimates that 70% of Russian companies use foreign imports and are now stuck with them. At a recent company visit to the biggest maker of Russian toothpaste, bne IntelliNews found that all the packaging was Russian-made, but all the ingredients in the toothpaste were foreign-made.

Another reason is that the current crisis has actually been a boon for the biggest organised retail players, as bne pointed out in its cover story "Shopping in a time of crisis." Retail volumes collapsed at the end of last year, contracting a massive 12.9% in 2015, but the biggest players have large war chests and consumers have been driven into the arms of the largest stores which are able to offer discounts to capture market share.

It is the smaller companies and Russia's ubiquitous produkti, or corner stores, that have taken it on the chin. With the financial wherewithal to weather the storm the big chains have been increasingly passing the cost of ruble devaluation on to their customers and so maintaining their margins. The consolidation of the organised retail sector is good for the companies and their investors, but bad for consumers.

"While in 2014 we had expected the pass-through [of devaluation related inflation to prices] to reach 15-20%, which was in line with the market consensus, in reality it was as strong as 35-40%, according to CBR estimates," says Alfa Bank. "While we expected cost pressures to be counterbalanced by the markups squeeze, in reality many local companies passed their rising costs to consumers, which implies high market power even in the face of the declining demand."

The bottom line is the population is the one that suffers from all this as people have to pay more for a smaller selection of poorer quality goods at a time when real incomes are also falling fast.

The main worry from the lack of reaction by the economy to the departure of imports is that it makes the prospect of economic stagnation more likely. Instead of boosting investment, the government is likely to go on a spending spree ahead of Duma elections in September and presidential elections in 2018. Social expenditure on pensions, social payments and public sector salaries already total 21% of GDP and there are 40mn pensioners and 18mn public sector employees who are also at the budget's teat. Without new jobs and businesses the government is going to be tempted to simply squander resources compensating these people for their losses as the economy slows, which will only make the problems worse.

"The lack of import substitution confirms the high risk of economic stagnation, and we thus find it hard to believe that the finance ministry will be able to avoid increasing social expenditures in the coming two years [because of upcoming elections]," says Orlova. 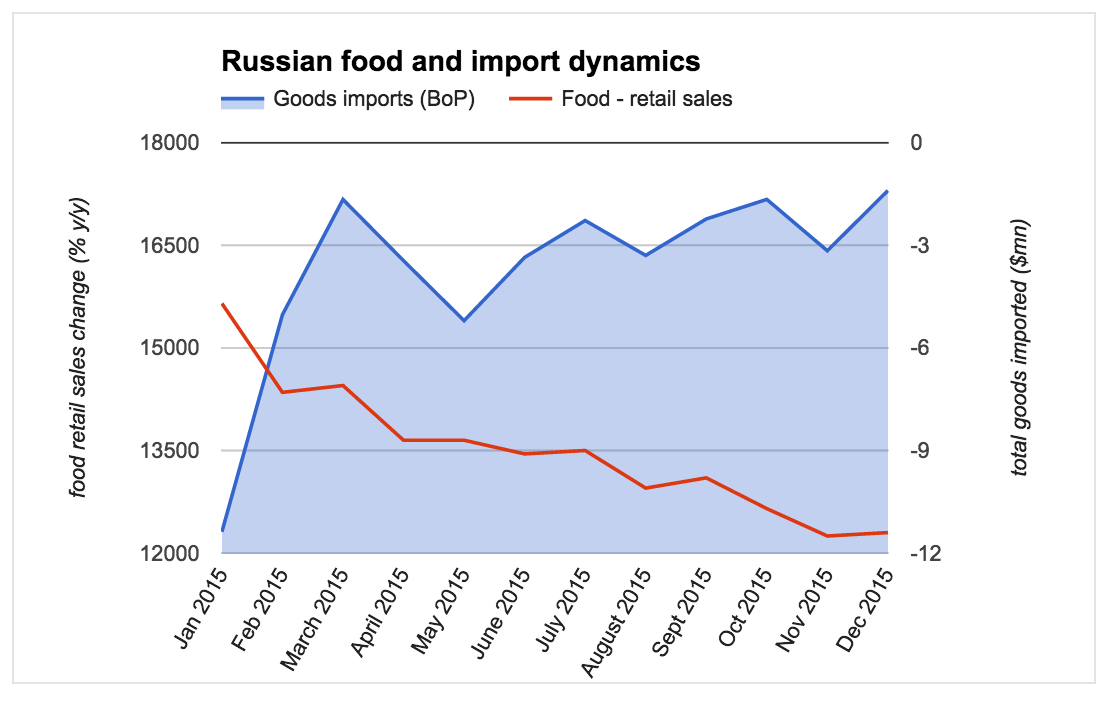 Romania’s public debt hits 50% of GDP at end-May
13 hours ago
Hungary's automotive industry continues to rebound in June
1 day ago
Russian GDP contracted by 4% y/y in the second quarter of 2022
1 day ago
Serbia’s annual inflation accelerates further to 12.8% in July
2 days ago
Poland’s CPI growth rate picks up just 0.1pp to 15.6% y/y in July
4 days ago