Russia’s gas production in January at a five-year high 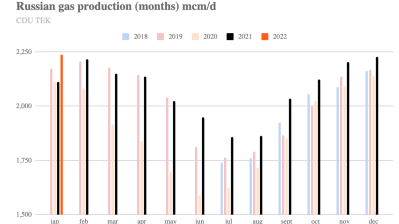 Russia's gas production jumped to a five-year high on the back of strong domestic demand, but exports to Europe were down by 40% in January. / bne IntelliNews
By bne IntelliNews February 8, 2022

The output of Russian gas was at its highest level in the last five years, while oil production was at a four-year low, CDU TEK reported at the start of February.

Russia’s gas output was up 1.1% year on year in January at 69.4 bcm, after output grew at almost all the main gas producing companies.

“In January, OPEC+ production grew an additional 400,000 barrels per day monthly, while Russia’s quota increased [by] 100,000 bpd monthly. The data on the production of gas condensate in January in the country is not available yet. If we assume it at 111,500 tonnes per day (December’s level), then the production of oil in January could have been some 10.1mn bpd, which would be in line with Russia’s OPEC+ quota of 10.1mn bpd,” VTB Capital (VTBC) said in a note. “However, we suppose that Russian oil companies are unlikely to be able to reach their quotas in accordance with the increasing OPEC+ schedule and deliver production of 10.4mn bpd of crude oil by May in the framework of their earlier articulated capex plans.”

VTBC estimates that crude production will only recover to the OPEC+ target by the end of the year (10.2mn bpd in 2022F on average, up 6% y/y), but that will have little effect on the companies’ valuations.

Gazprom was producing at 1.57bn cubic metres per day in January, which analysts say is close to its maximum capacity, as the state-owned gas giant struggles to meet both domestic demand and also fulfil its export obligations. As bne IntelliNews has reported, the V-shaped market of the last two years has pushed Russia’s ability to produce gas close to the maximum and without tapping the new fields in Yamal Russia’s ability to export more gas is limited. However, there is significant unused production and export potential from the Yamal fields, but without the new Nord Stream 2 pipeline in operation that gas cannot be exported and there only few interconnectors linking the Nord Stream 2’s northern route to the central route that runs to western customers via Ukraine’s pipeline network.

Gazprom cited the increased gas demand for gas in Russia as driving up production, which was the key driver for the growth. In export, Gazprom delivered about 10.5 bcm to Europe, down 43% y/y (but still slightly higher than the historical record low of January 2009), according to VTBC.

“The company continued to fulfil its contract obligations to European customers, and is likely to increase deliveries later this year as the majority of contracts are take-or-pay and have limited flexibility in terms of gas delivery fluctuations over certain time periods (e.g. a quarter), as we have already seen from the growing gas exports in the first two days of February,” VTBC said.

On February 2, the participants of the OPEC+ ministerial conference approved an increase in oil production in March by the planned 400,000 bpd, according to the OPEC website.

As a result, Russian producers would increase oil production 100,000 bpd in March 2022, according to Russian Deputy Prime Minister Alexander Novak. However, by the end of January, OPEC+ participants were unable to produce oil in line with their new quotas, as some countries have been experiencing problems with increasing production, reports VTBC.

“This is in line with the existing schedule for raising OPEC+ production. We note that the baseline agreement envisages Russian crude oil production growing 100,000 bpd every month until April 2022. However, in our view, Russian oil companies are unlikely to be able to reach their quotas in accordance with the increasing OPEC+ schedule and deliver production of 10.4mn bpd of crude oil by May under the guided capex plans. We estimate that crude production will only recover to the OPEC+ target by the end of the year (10.2mn bpd in 2022F on average, up 6% y/y),” VTBC said in a note.