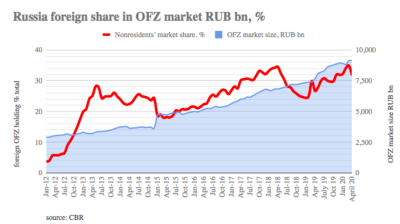 The share of foreigners invested into the Russian OFZ bond market has stabilised at 31% after a brief sell-off in March, providing a useful source of funds for the Ministry of Finance this year
By bne IntelliNews May 21, 2020

Russia's finance ministry continued to place record-high volumes of OFZ bonds on weekly auctions, selling RUB170bn ($2.4bn) worth of federal bonds in three issues to meet a total demand of over RUB230bn ($3.2bn) this week.

As reported by bne IntelliNews, on strong guidance from the Central Bank of Russia (CBR) for monetary easing, demand for OFZ bonds increased despite coronavirus (COVID-19) volatility.

Russia’s domestic treasury bills have held up well in the crisis and after an initial sell-off, demand for the bonds has remained strong amongst foreign investors, who see Russia as something of a safe haven thanks to its rock-solid macro-fundamentals.

However, in April foreign investors sold circa RUB300bn worth of OFZ, taking their total down to RUB2,892bn from a total of RUB9,130bn outstanding bonds that remained unchanged month on month, or 31.7% of the total. Despite the sell-off, foreign investors still held more OFZ than they did at the start of the year, when they owned a total of RUB2,850bn.

Analyst say that the domestic OFZ market has stabilised now that the initial shock of the double whammy of an oil shock and a pandemic stop-shock to the economy has worn off.

The appeal of the domestic market to foreigners is important, as although the government posted a surprising triple surplus in April – trade ($3.8bn), current account ($1.8bn) and federal budget (0.2%) – the federal budget is expected to end this year with a 6%-8% GDP deficit. While that can be entirely covered from the RUB9 trillion (c.9% GDP) in the National Welfare Fund (NWF), the ever prudent Ministry of Finance is expected to tap the OFZ market to cover some of the shortfall in order to preserve the funds in the NWF to deal with future shocks. The Ministry of Finance has said it will double borrowing in the domestic market to something like RUB4 trillion this year.

Russia could need up to RUB2 trillion ($27bn) of additional state borrowing for the federal budget in 2020, First Deputy Prime Minister Andrei Belousov told the press, as cited by Reuters on April 23. As reported by bne IntelliNews, policymakers and analysts argued that given its strong external position Russia can afford to borrow to finance an adequate response to the coronavirus (COVID-19) crisis.

Previously Finance Minister Anton Siluanov estimated that the state support package amid the coronavirus epidemic accounts for RUB3.1 trillion (2.8% of GDP), and that RUB2 trillion will be used to cover the budget deficits from the National Welfare Fund.

The federal budget for 2020 originally planned for RUB2.3 trillion of domestic and $3bn of foreign borrowings, but Russia might have to borrow an extra RUB2 trillion to finance the coronavirus fiscal stimulus. Siluanov excluded more borrowings beyond that, arguing that the cost of sovereign debt remains high.

Overall in April-May, the ministry already raised over RUB636bn, beating the second-quarter plan by 6%, and bringing year-to-date OFZ borrowings to RUB1.1 trillion ($14bn) – about half of the total planned borrowing for this year, according to the current budget.

Analysts surveyed by Kommersant daily estimated that on high demand the placements were sold at about 2bp discount to the secondary market, while the yield for the 19-year issue was at a record low. At the start of 2018 when fears of new sanctions were highest and sparked a big sell-off, yields on OFZ spiked to over 9% but have fallen nearly 400bp since then.

Most of the buyers at the current auction were banks that are moving funds into OFZ bonds on lower demand for credit, while the foreign investors are seeking a safe haven that carries some non-zero return during the current crisis. However, previous reports suggested that at least some foreign activity could in fact be attributed to Russian buyers offshore.