Russia’s Economy Ministry releases fresh forecasts for 2020 and beyond on June 18. 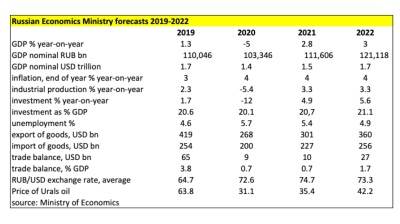 Russia's Ministry of Economics has released a fresh forecast for 2019-2022: no V-shaped recovery, but strong RUB and low inflation and unemployment / bne IntelliNews
By Ben Aris in Berlin June 18, 2020

The Urals price stays below the base budget price of $42, at which point the Russian budget breaks even. Urals will average $31.1 per barrel this year, rising to $35.4 in 2021 and only in 2022 will it return to the breakeven price of $42.2 when Russia Inc. goes back into profit.

That means the Ministry of Finance will rely on the National Welfare Fund (NWF) to top up budget spending until 2023. Currently there are some RUB9 trillion ($130bn) of liquid assets in the NWF. With an estimated RUB3 trillion shortfall in budget revenues forecast for this year there is therefore enough in the NWF to cover at least another three years of deficits.

The ministry also says the ruble will remain relatively strong over the period. The ruble was trading at an average rate of RUB64.7 to the dollar in 2019 before the start of the oil price shock and the coronacrisis, but sank to a low of RUB80 in the bowl of the panic that followed. It has since recovered to break below RUB70 again in the first weeks of June. The Ministry of Economy predicts that the FX RUB/$ rate will average RUB72.6 to the dollar this year. After that the rate will go to RUB74.7 ad RUB73.3 in 2021 and 2022 respectively.

At the same time, unemployment will remain at an elevated level of 5.7% this year, up from 4.6% in 2019, before diminishing slowly over the next two years to 5.4% and then 4.9% respectively.

The fall in oil prices will also put pressure on the balance of payments, but those will remain positive throughout. Russia ran a $65bn trade surplus in 2019 that will fall to a mere $9bn this year, before recovering very slowly to $10bn and $27bn over the next two years.

Among the other predictions the Ministry of Economy estimates that inflation at the end of the year will go from 3% in 2019 to 4% this year and stay at that level for the next two years – at the CBR’s target rate.