Russia's consumer demand is back after incomes tick up in October 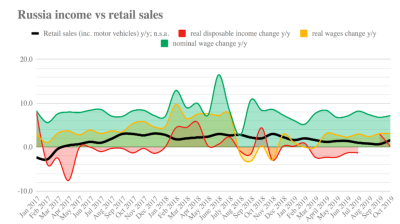 After four years of stagnation consumer demand is back after real incomes ticked up in October and led to a 1.6% y/y rise in retail sales.
By bne IntelliNews November 21, 2019

After four years of stagnation consumer demand is finally back as a main driver of Russia’s economic growth. An uptick in real incomes in October has fed through to retail sales which expanded by 1.6% year-on-year, reported Rosstat on November 20.

Retail turnover growth had been slowing all year but in the last month the fall has stopped and reversed. Real wages have been contracting for almost six years now but they expanded by 3.1% in September, partly lifted by the faster than expected fall in inflation, which was down to 3.8% in October and is now expected to end the year under the Central Bank of Russia (CBR) targeted 4% level.

While analysts say the positive results are not the start of a boom, this autumn's results were welcomed as signs of a strong economic recovery as Russia emerges from its two year oil price collapse induced recession between 2014 and 2016.

“Real sector of the economy shows continued expansion. Growth dynamics in other key sectors of the economy were also positive: agricultural output increased by a robust 5.2% y/y last month, industrial production was up 2.6% y/y and volumes of construction rose 1% y/y (vs 0.8% in September and 0.3% in August). Fixed investment grew c1% y/y in 3Q19, up from 0.5-0.6% growth seen in the previous two quarters,” BSC Global Markets chief economist Vladimir Tikhomirov said in a note. “The only small negative was a slight increase in the unemployment rate (4.6% v 4.5% in September), but this is merely a reflection of seasonality (cuts in temporary jobs in agriculture and construction).”

The boom during the noughties was driven by the state’s decision to close the gap between public and private sector wages and a decade of 10% wage hikes each year that fuelled a consumer led expansion. That is not going to happen again, but consumption remains one of the three big economic drivers and a recovery in real wages, helped by the ongoing falling inflation, will improve Russia’s business climate. The mild recovery in construction – the volume of residential construction was up by 11.1% year-on-year in October vs 2.8% in September – is another positive signal and another one of the main economic drivers. The fly in the ointment is the last big driver of growth is investment and that is lagging.

Investment next year will be driven by the 12 national projects that will see state investment into infrastructure rise from the 2% average of recent years to circa 3-4% of GDP that could add as much as 1% of GDP growth. But the jury remains out on the efficacy of this spending and how effective it will be. A recent study from Oxford Economics suggested that all the economic growth gains from the extra spending on the national projects will be cancelled out by the tax increases used to raise the money.

Romania's industrial production index increased by 13.4% y/y in March but this was largely a reflection of the lockdown enforced in March 2020.

Inflation in Serbia has been speeding up gradually since the beginning of the year.

Growth to be driven by domestic consumption while a negative contribution is expected from net exports.