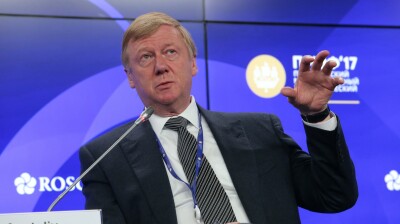 Russia’s Chubais is in hospital on life support and is suspected being poisoned / wiki
By bne IntelliNews August 1, 2022

Kremlin insider is in hospital in a European clinic on life support in a suspected poisoning case, Russian socialite Ksenya Sobchak reported on July 31.

Chubais fled Russia on a private plane after the February 24 Russian invasion of Ukraine. The room where he was staying in an unspecified European country was searched by men in hazmat suits, according to Sobchak. Police also questioned people at the scene, she added.

The former presidential advisor to president Boris Yeltsin and so-called young reformer was one of the most senior pro-Western members of Russian President Vladimir Putin government. He held a number of high-profile jobs including the CEO of Russia’s utilities holding United Energy Systems (UES), which was successfully privatised, and more recently was the CEO of Rusnano corporation, the state-owned tech promotion holding.

Sobchak knows Putin well after he worked for her father Anatoly Sobchak, the former mayor of St Petersburg, at the start of Putin’s  career in the early 1990s. She became a well-known socialite with a popular blog before going into politics, both as an opposition figure, but also running for parliament and is also seen as a pro-Kremlin figure.

Sobchak reported on her Telegram channel that Chubais was taken to a “European clinic” citing Chubais’ wife, Avdotya Smirnova, a film director, with Guillian-Barre syndrome, a rare nerve disorder that can have serious consequences.

"Chubais is in an intensive care unit. I have just spoken to Avdotya. His condition is instable. He felt sick suddenly, with weakness in his arms and legs," Sobchak wrote on her Telegram channel.

"I was taken to a European clinic with Guillian-Barre syndrome. I am in condition of medium gravity, stable," Sobchak cited Chubais saying.

The initial diagnosis is for Guillain-Barre syndrome, a neurological disorder and autoimmune disease that affects the peripheral nervous system. It can cause muscle weakness, reflex loss, and numbness or tingling in parts of your body. Sobchak reports that the investigation into Chubais’ illness is ongoing.

Sobchak stated: “In this case, the diagnosis may change.”

Tass reports that the syndrome can be brought on by the coronavirus vaccines, but reports that Chubais’ room was searched by officials in hazmat suits has led to speculation that he was poisoned.

Chubais fled Russia at the end of February and has been seen in Cyprus, Turkey and Israel. His current where abouts is unknown. He has not commented in public on the reasons for his departure from Russia, nor commented on the war in Ukraine.

Chubais was dismissed from the post of Russian presidential envoy for relations with international organization in the interests of sustainable development in March after he left the country.

The circumstances of the case appear similar to that of opposition anti-corruption activist Alexei Navalny, who was poisoned with Novichok in a hotel room in Siberia in the summer of 2020 before collapsing on a flight back to Moscow. Navalny was medivaced to Germany where he recovered before returning to Russia where he was jailed in January 2021.