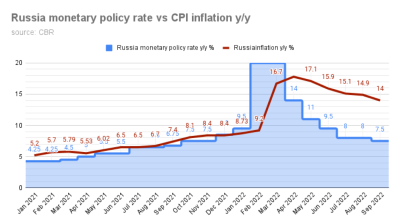 The Board of the Central Bank of Russia (CBR) resolved to cut the key interest rate by 50 basis points (bp) to 7.5% at its policy meeting of September 16, making a sixth consecutive cut, but slowing the pace of monetary easing in line with expectations.

As followed by bne IntelliNews, in July the CBR continued its aggressive rate-cutting cycle, slashing rates by another 150bp to 8%, well below pre-war levels.

The CBR more than doubled the interest rate to 20% on February 28, a few days after Russian forces crossed the border into Ukraine, to contain the inevitable shock to the currency and to contain soaring inflation. The fast action seems to have worked, as inflation had begun to fall from its peak of 17.8% in April to 15.9% in June (chart).

For the upcoming meeting of September 13, nine out of twelve economists in the Bloomberg survey predicted that the CBR would slow down the rate-cutting to a 50bp drop to 7.5%.

"The current rate of increase in consumer prices remains low, contributing to a further slowdown in annual inflation. This is due to both the impact of a set of one-off factors and subdued consumer demand. The dynamics of business activity are shaping up better than the Central Bank of Russia (CBR) had anticipated in July," the regulator commented in a press release that accompanied the latest interest rate decision.

This wording of the statement confirms previous reports that speculated that the CBR is paying more attention to economic recovery and activity, apart from watching inflation.

As far as inflation is concerned, the latest weekly data suggested that despite local spikes in consumer prices, the deflationary trend is far from being over. Indeed, the CBR has improved its inflation forecast, anticipating 11-13% annual consumer price growth for 2022 versus the previous forecast of 12%-15%, while still expecting inflation to return to a 4% target in 2024.

Still, the CBR decided to moderate the pace of monetary cutting due to deflation slowing down and inflation expectations of the population heating up in September from 12% to 12.5%.

"The decline in the overall inflation rate was largely due to the ongoing correction of prices for goods and services after their surge in March. The exchange rate dynamics of the ruble and the generally subdued dynamics of consumer demand contributed to this. An additional disinflationary factor was the expansion of supply on some commodity markets amid continued external and domestic export restrictions," the CBR commented.

As far as further key interest rate decisions until the end of 2022, the CBR said it will "make further decisions on the key rate taking into account the actual and expected dynamics of inflation relative to the target,” while guiding for “neutral monetary conditions”.

The CBR still has another two meetings scheduled in 2022 for October and December, and the analysts surveyed by Bloomberg and by RBC business portal prior to the key rate decision expected the key interest rate to decline to 6.5%-7%.

However, at the press-conference following the policy rate decision the Governor of the CBR Elvira Nabiullina did not provide clear guidance for further key rate cuts, noting that current uncertainty in budget spending and its impact on the real economy make it difficult to predict further interest rate movements.

"With this level of the key rate, we estimate that we are in a neutral monetary policy (monetary policy) zone. We see one-off disinflationary factors gradually losing strength and pro-inflationary risks increasing. We believe that the space for further key rate cuts has narrowed," Nabiullina said.

Renaissance Capital analysts thus expect that the CBR will sit the uncertainties of the first winter under sanctions out, keeping the rate unchanged in October and December meetings. RenCap then expects the lowering of the rate to 6.5% to be postponed to the end of 2023.

The analysts surveyed by RBC business portal after Nabiullina’s September 16 comments have revised their key interest rate forecasts from 6.5%-7% to 7%-7.5% by the end of the year.

The analysts at RenCap remind that the average key rate was around 7.75% when inflation stabilised near the 4% target in 2017-2019, which makes the current 7.5% a comfortable rate level for the CBR. However, given that the regulator is not facing a more isolated financial system, in the long-term the analysts see the need for a sustainable reduction of the neutral interest rate level to below 6%.

Key focus remains on the uncertainty of the government's fiscal policy in new economic conditions. So far the CBR is not viewing the budget as a risk unless there is "additional deficit expansion", according to Nabiullina, but any additional fiscal stimulus will be watched by the CBR due to its effects on inflation and exchange rate.

"A long-term fiscal policy shift towards softer fiscal policy means that the central bank will have to maintain higher rates to ensure price stability," the CBR governor said.

Sberbank CIB commented that investors took the shift in the CBR's stance “somewhat negatively”. The Moscow Exchange index lost 0.6% after Nabiullina’s press-conference, with real estate developers among the main underperformers.

“This was in part because developers are among the main beneficiaries of aggressive rate cuts, but also because CBR Governor Elvira Nabiullina spoke out against the practice among developers of offering mortgages at below-market rates and indicated that measures might be taken in response,” Sberbank CIB commented.