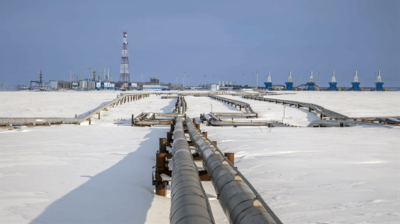 Russia’s Gazprom  flagship Power of Siberia gas pipeline mega-project that connects Russia’s Siberian gas fields with China came online on December 2, after the investment of billions of dollars that will earn the company billions more with delivery of gas to China each year.

The 3,000-km pipeline will carry gas from the Chayandinskoye and Kovytkinskoye fields in Eastern Siberia over at least three decades, flowing 38bn cubic metres of gas each year when it reaches maximum capacity.

“This is a genuinely historical event not only for the global energy market but above all for us, for Russia and China,” said Russian President Vladimir Putin, who watched the launch via video link from Sochi. “This step takes Russo-Chinese strategic cooperation in energy to a qualitative new level and brings us closer to [fulfilling] the task, set together with Chinese leader Xi Jinping, of taking bilateral trade to $200 billion by 2024.”

Russia relies on Europe for the vast bulk of its gas exports, with volumes totalling just under 200bcm annually. But in recent years it has struggled with flat demand for gas on the continent as well as rising competition from LNG.

Gazprom was stung by a 45% drop in net profits in the third quarter, blaming the decline on lower exports to Europe and weaker prices. Power of Siberia will help diversify the company’s revenue base by opening a route for large-scale shipments to China, the world’s biggest gas importer.

There is a clear economic rationale for Russia to connect its sizeable gas resources with China’s burgeoning gas market. Russia has almost 39 trillion cubic metres in proven gas, according to BP data, but it has struggled to develop resources in its east because of a lack of export options.

For its part, China is keen to pipe gas to its northwest territories as they remain underdeveloped and sparsely populated, with the bulk of its population living along the coast in the southern half of the country.

The road to Power of Siberia’s completion was beset with difficulties. Beijing and Moscow began discussing the project seriously more than a decade ago, though negotiations were marred by wrangling over the price of gas supplies for many years. It was not until 2014 that Gazprom signed a $400bn, 30-year gas supply deal with its Chinese counterpart CNPC that made its construction possible.

The price China has secured for Russian gas remains a closely guarded secret, though Beijing is widely believed to have had cut a lucrative deal by exploiting Russia’s economic and political isolation following its annexation of Crimea in early 2014.

VTB Capital said in a research note on December 2 it expected China to pay a price on a pair with those paid by Gazprom’s customers in Western Europe, which should come to around $202-205 per 1,000 cubic metres in 2020.

What is more, Russia had initially hoped to get $25bn in prepayment for gas supplies from China to help pay for Power of Siberia’s construction, but these funds never arrived. Instead it was forced to cover the project’s entire $55bn cost internally.

The project’s budget was initially less than half this sum, but soon ballooned, with analysts pointing to Gazprom’s opaque mechanism of awarding contracts to construction companies owned by Kremlin insiders, the so-called stoligarchs, as the cause.

As bne IntelliNews reported, The gas firm is now seeking to buy out some of these companies. Gazprom will close a deal to buy 100% of the company's largest subcontractor Stroygazmontazh that did much of the work on the Power of Siberia, controlled by stoligarch Arkady Rotenberg for RUB70bn-95bn ($1.1bn-$1.5bn), according to reports by RBC business portal and Vedomosti daily citing unnamed sources.

Power of Siberia will also take a considerably long time to ramp up to full capacity, reaching this point only in 2025. Gazprom is required to supply at least 5bcm of gas from the pipeline in 2020, 10bcm in 2021 and 15bcm in 2022 under its contract with CNPC, while the Chinese firm's minimum offtake is 85% of delivered volumes. How quickly supplies increase will depend on demand in China, as well as how cheaply the country can procure supplies from elsewhere, including LNG. At the same time the Chinese domestic gas distribution pipeline network needs to be developed as it has never had a northern supplier before and so much of the infrastructure has yet to be built.

“The launch is positive for the company, as it opens access to the fast-growing Chinese market, while exports to Europe are flat lining,” VTB said, estimating that Power of Siberia supplies would make up 14% of Gazprom’s overseas shipments by 2025.

China already buys Russian gas from the Yamal LNG project in northern Siberia. Once Power of Siberia is running at full capacity, it could become Russia’s second-biggest gas customer after Germany, which took 58.5bcm of Russian gas last year. Beijing and Moscow have discussed additional supplies via proposed pipelines through Russia’s Altai region and via Mongolia, but new supply deals still need to be finalised.

At the same time, Gazprom is preparing to launch two more major pipeline projects in Europe – the Nord Stream 2 to Germany and the Turkish Stream (aka TurkStream) to Turkey – in order to scale back gas transit via Ukraine. Turkish Stream is slated for launch in January, while Nord Stream 2 is expected to come on stream later in 2020.

Nord Stream 2 fell behind schedule because of Denmark’s delay in issuing a construction permit, which was finally granted in October.