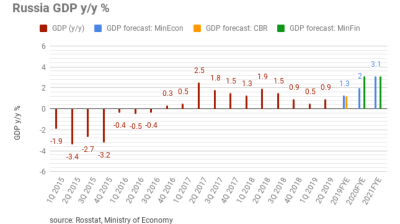 Russia recorded slightly stronger GDP growth of  0.9% in the second quarter of this year, up from the soggy 0.5% the economy grew by in the first quarter, Rosstat reported on August 12.

The result was anticipated by analysts, who pointed out that the economy’s core sectors were doing better than expected over the summer, and the final result has come in at the top of the predicted range.

Forecasts for Russia’s growth this year have been downgraded multiple times. The Ministry of Economy was predicting 2% growth for this year after Russia put in a surprise 2.8% growth in 2018, but Minister of Economy Maxim Oreshkin quickly backed off in face of widespread disbelief and revised the ministry's estimate back to 1.2%.

Russia will probably struggle to cross even that low bar. “The slightly better-than-expected 0.9% y/y rise in Russian GDP in Q2, up from 0.5% y/y in Q1, is likely to be followed by a further improvement in the second half of the year. But growth is still likely to be weaker than most expect – and this will give the green light to the central bank to cut rates further,” Capital Economics said in a note following the release of the results.

The latest GDP growth figure was slightly above the consensus forecast of 0.8% year-on-year, but Rosstat hasn’t published a seasonally adjusted quarter-on-quarter growth figure and preliminary estimates of Russian macro data are prone to dramatic revisions, but the economy does seem to have improved.

“By our estimates, output rose by about 0.9% q/q in Q2, more than reversing the 0.4% q/q fall in GDP recorded in the previous quarter,” says Capital Economics.

Economists speculate that the pick up was due to an improvement in industry and an easing pace of contraction in the wholesale trade sector.

Russia’s manufacturing and services PMI indices, forward looking indices based on interviews with companies, also improved in July, but the overall composite PMI score was 50.2 – only just ahead of the 50 no-change mark. Stepping back a pace, it is clear that the economy is stagnating.

“The economy is still extremely weak. GDP expanded by an average of just 0.7% y/y over the first half of the year, compared with 2.3% over 2018,” Capital Economics said in a note.

Two factors are expected to improve the picture in the second half of this year. Firstly the RUB25.7 trillion ($390bn) investments planned for the 12 national projects has been off to a very slow start this year but is expected to pick up pace in the second half of this year, boosting growth. Secondly the Central Bank of Russia (CBR) cut rates by 25bp last month and is expected to cut again at its next monetary policy meeting in September, which will also give growth a shot in the arm.

“We expect growth to strengthen a little in the coming quarters. With inflation falling and the tight labour market pointing to stronger wage growth, retail spending should pick up,” Capital Economics said. “And fiscal and monetary policy are becoming more supportive. But we think GDP will expand by just 0.8% over this year as a whole (the figure will be depressed by the weak Q1), which is lower than the consensus forecast (1.2%). Our GDP growth forecast for 2020 is 1.8%.”