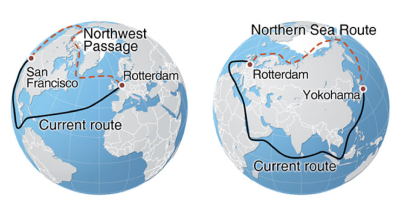 It’s so cold on Russia’s northern coast that in winter the sea freezes into meters-thick sheets of ice. But the Northeast Passage is also the shortest shipping route from Europe to Asia. The alternative is to steam thousands of kilometres south all the way around the horn of Africa or through the Suez canal. After investing heavily in nuclear powered icebreakers, Russia has opened the Northeast Passage to commercial shipping and the volumes of cargo using the route are rising fast.

During the first ten months of 2017, nearly 8mn tons of cargo was shipped via the Northeast Passage, already surpassing last year’s record volume by 8.3%. One of the key port facilities in the Russian Arctic, the port of Murmansk, saw an increase of cargo volume by 60.1% year-on-year, according to the Russian Association of Commercial See Ports.

The amount of cargo shipped along what some call the “Russian Suez Canal” has been growing steadily since 2013, with the last years in particular seeing a surge in freight tonnage. For example, in 2015, the volume of cargo transported along the route surpassed the previous year’s volume by 36%, only to grow by another 33% the following year.

However significant this recent increase might appear to be, it is still far below the alternative route’s full potential. The Northeast Passage has been in use since the early days of the Soviet Union, originally intended to be used as a blockade-free exit route during World War 1. Its utilization peaked in the late 1980s, when the annual cargo volume reached 6.5mn tons, only to see a significant slowdown in 1990s.

The Soviet record was already beaten last year, which saw the total amount of 7.3mn tons of cargo shipped along the Northeast Passage. But even last year’s number represents a fraction of what the full potential of the icy northern route might be. According to Vyacheslav Ruksha, the head of Atomflot, the Russian company and service base that maintains the world’s only fleet of nuclear-powered icebreakers, the figure will eventually increase ten-fold. The plan is to reach 40mn tons of cargo by 2024 and double that number by 2029.

The new route is in keeping with the Kremlin’s “pivot to the east” where Russia puts more emphasis on building up trade with China and SE Asia and lets trade with Europe atrophy. Russo-China trade is on course to hit $80bn this year and is planned to reach $200bn by 2020, whereas trade with Europe has already fallen by €100bn in three years to €228bn as of the end of 2016.

In order to reach the Northeast Passage’s full potential, Russia has been allocating large amounts of money to the development of its nuclear-powered icebreaker fleet. According to some estimates, eight more nuclear-powered icebreakers will have to be built if the Kremlin is to reach its ambitious increases in shipping tonnage volumes goal by 2029.

In addition to the icebreakers already in operation, a total of 14 diesel-powered ships are also currently under construction, all of them are being built at shipyards in the St Petersburg area in the western part of the country.

Atomflot’s Arctic ambitions go far beyond just servicing Russia’s Arctic fleet. Earlier this month, Atomflot’s parent company, Rosatom, drafted a bill that would grant it full control over infrastructure and navigation along the Northeast passage. This would basically give the Russian state nuclear corporation the exclusive right to manage everything to do with Russia’s Arctic region, leading to a consolidation of the country’s Arctic policy.

The Russian government plans to build a unified transport system that includes the Arctic that would be used as a sort of a national maritime super highway, connecting several different ports along the Northeast Passage to a system of railroads and rivers in the northern parts of Russia, including several important mining settlements such as Norilsk, that are cut off from the “mainland,” as the rest of Russia is known to the locals of these towns. Improved infrastructure would bring the periphery closer to the centre, allowing it to benefit from the economic interaction.

Currently all the supplies, from food to fuel, has to be flown into these towns, vastly increasing the costs, especially for social groups like pensioners, who are trapped in these settlements thanks to their inability to sell their apartments.

Apart from investing in the new generation of icebreakers, the Russian government has pledged to modernize existing Arctic ports and build new ones. One Russian Arctic region that is of particular interest to Moscow, and many other international investors for that matter, is the Yamal region on Russia’s northern coast, which harbours vast reserves of oil and natural gas. In December Russia’s second liquid natural gas (LNG) plant went online that was built by the privately owned Novatek and opens up new Asian markets for LNG tankers steaming east through the Northern Passage. And there are already plans for a second plantw fed by the Yamal gas fields.

There are currently over 200 gas and oil fields in Yamal. Moreover, the region boasts proven hydrocarbon reserves of 44.5 trillion cubic meters of gas and nearly 5bn tons of oil. The first Yamal LNG plant has a output capacity of around 16.5mn tons per year that already almost triples Russia’s LNG production and has made it a major player in the business overnight.

Russia is taking advantage of the rapid Arctic sea decline that has in recent decades brought new possibilities for Arctic marine navigation. The debate about the potential replacement of the conventional Suez or Panama Canal routes for international shipping between Atlantic and Pacific regions has been motivated by these far-reaching changes.

The Northern Passage shortens the transport distance from northern Europe to northeast Asia and northwest North America by up to 50% relative to the alternative southern routes through the Suez or Panama canals. By extension, it is assumed that the increasing traversability of the Arctic route will naturally lead international freight companies, eager to push down expenditures, to reconsider their shipping lanes choices.

The seemingly irrevocable Arctic sea ice retreat during the last couple of decades has already gravely impacted the Arctic marine transport systems and shelf exploration, and a lots of studies seem to support the claim that this trend will continue in the years to come.

There are multiple variations of climate models, all projecting a slightly different view of what the future will hold. Nevertheless, most of these models are cantered on the proposition that the 21th century will see further decrease of sea ice cover. This doesn't mean ships that are not accompanied by cie-breakers will be able to use the route any time soon, but open water conditions will prevail longer making the route easier and cheaper to traverse.

For example, in his recent paper, Vyacheslav Khon from the Institute of Geosciences at Kiel University calculated accessibility along the whole route for each day of the year. According to the models he selected for his study, the ice-free Northern Passage transit navigation period will grow from 3.5 to 6.5 months per year, but only by the end of this century.

Moreover, even if the Arctic ice continues to melt, there will still be several risks that could prevent many international freight companies from abandoning the Suez option. Multiple studies of the Arctic warn about high risks due to waves and accompanying storm surges and coastal erosions. And that is not to mention the icebergs that will pepper the northern seas. Most of these natural problems forces are expected to be particularly prevalent in the Northern Passage.

In any case, all debates about the presumed threat that the Suez Canal Authority could potentially face by the advent of the opening up of an alternative northern route are still rather premature. The numbers speak for themselves: if the 2016 throughput of the Suez Canal was 819mn tons of cargo, the corresponding figure for the Northern Passage 7.3mn tons – a hundred times smaller.