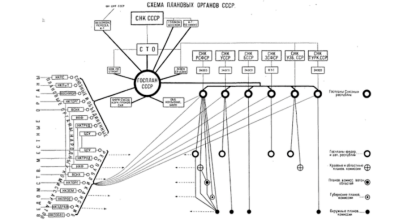 A schematic diagram of Gosplan, the planning tool employed in the USSR to manage output in the state-controlled economy. / Gnosandes
By bne IntelliNews November 2, 2022

Russia is mulling reviving the Soviet system of state-controlled supply-side market management, or Gosplan, albeit currently only for the needs of the industrial military complex and the invasion of Ukraine, Vedomosti daily reported citing the discussions at the roundtable "Gosplan 2.0 as Economic Development Stimulation Mechanism" that took place in the Federation Council on October 31.

bne IntelliNews has analysed how Kremlin is preparing for a protracted conflict and putting the Russian economy on a war footing. Vladimir Putin most recently established the Coordination Council headed by technocrat Prime Minister Mikhail Mishustin. Endowed with broad powers, the Council's main goal is to streamline the federal and private sector resources towards the war efforts in Ukraine.

In this context, "many experts have begun to express the view that the Gosplan and the transition to a planned economy have been revived," the deputy chairman of the Federation Council Committee on Economic Policy Alexey Sinitsyn said.

The State Planning Committee, or the Gosplan, was established in 1921 and was tasked with administering five-year economic governance plans.

The ministry reminds that the “top-down” nature of Gosplan that ignores market price signals and other real-time factors is its main default. But according to Sinitsyn, the Soviet planning model was abandoned because of a lack of computing power. State planning today could be undertaken at a new technological level, he argued.

To remind, PM Mishustin, who is now heading Putin's war council, is a trusted technocrat who prior to being appointed PM in 2020 had successfully revamped and digitilised the Federal Tax Service (FNS).

Participants at the roundtable also reminded that the state already directly manages more than half of the Russian economy, with the share of the public sector doubling in the past 20 years to 56.2%. The same is true for the financial markets, as the share of companies with state participation in the total equity market capitalisation in 2021 was 75.4%, and 51% in the volume of corporate bonds.

The Ministry of Industry and Trade now proposes to introduce a Gosplan 2.0 for the needs of the war in Ukraine and “state security” in the long term.

"This allows, on the one hand, limiting the field of activities where the state has sufficient information and leverage over industrial enterprises, and, on the other hand, getting the effect exactly of planning production activities along the entire value chain," the ministry’s report for the roundtable read, as cited by Vedomosti.

However, an unnamed federal official told Vedomosti that transition to a planned economy is not on the government's agenda. "The current government management tools – first of all, the state [financing] programmes – have shown their effectiveness, they are adapted to the current conditions and provide for the necessary flexibility in the use of budgetary resources," the source said.

The analysts surveyed by Vedomosti remind that the Soviet Gosplan was omnipresent, governing the production of everything from paperclips to spaceships, with no major economy in the world today being managed by such a rigid centralised planning system. China has implemented a mutual co-ordination between the state and private sectors, with as much as 70% of the GDP produced by the latter.