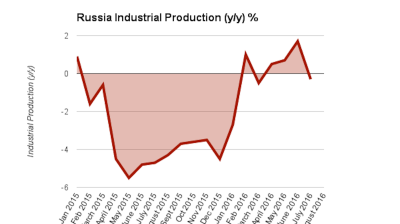 Russia’s industrial production data for July, released on August 16, surprised economists by contracting after several months of growth, highlighting the fragile nature of the economic recovery that is widely believed to have started this summer.

The preliminary estimate of a 0.3% y/y contraction industrial production caught analysts off guard, as it follows a relatively robust 1.7% expansion y/y in June. Industrial production growth has been positive in five out of the first seven months of this year, but commentators were expecting it to start gathering momentum in July.

“We had expected IP growth to slow down, but not to the extent it did. Viewed from the monetary policy angle, this data surprise adds arguments in favour of the CBR’s Board of Directors easing at its September meeting, while disinflation is likely to be seen as ‘in line’ with expectations, declining to 6.8-6.9% y/y before the meeting,” VTB Capital said in a note.

The result was well down on the Bloomberg-compiled consensus that expected a slightly milder, but still positive, growth of 0.8% y/y.

The number is a preliminary estimate that could be revised up in the coming weeks, which is not unusual in Russia these days. The central bank has been forced to make several fairly dramatic data revisions this year already as the recovery appears to be a stop-and-start affair.

Components give a mixed picture

The drag on the headline industrial production growth mainly came from manufacturing, which went from 1.6% y/y in June to -1.5% y/y in July, VTBC reports. The sequential contraction of -0.9% m/m in July was the biggest since the -1.4% in April 2015 and the first negative print, in annual terms, since March 2016.

Mining and quarrying was up 1.8% y/y, from 1.6% y/y a month ago, from oil extraction, which is running at record levels. The increase in oil extraction was the only significant contribution to the growth rate of the mining subindex, which accelerated to 1.7% y/y from 0.6% y/y.

“Underlying the more upbeat oil extraction data was increased drilling activity by oil companies, especially some of the biggest. As our oil team highlighted in the Rosneft Yugansk trip notes of 15 July, production growth could be achieved by substantial drilling expansion -- from drilling 800-900 wells per year, to 1,500-1,700 over the next three years -- as well as by completing more sophisticated wells,” VTBC reported.

The contraction in manufacturing of 1.5% y/y was particularly disappointing and the biggest negative contributor to the fall in the headline number in July. This negative result followed on from a 1.6% y/y expansion in industrial production a month earlier.

The decline in manufacturing was not related to seasonal or other technical factors, but was the result of a simultaneous deterioration in activity across major industries.

Construction-related items followed the downward march in construction activity, which posted a decline of 9.7% y/y in June, with y/y drops in the output of cement (7.2%), bricks (11.4%) and constructions made of cement, concrete or artificial stone (19.6%).

In metals, which has been doing better thanks to beneficial devaluation effects, output growth also softened, with growth in steel production down to 0.9% (from 2.6% in June), rolled iron declining 2.9%, and steel pipes contracting 25.7% (after -17.9% in June). While the latter is likely to be related to pipeline construction activity, the growth in the output of steels has been confounded by weaker activity in construction and manufacturing (as passenger cars construction is down 19.8% y/y).