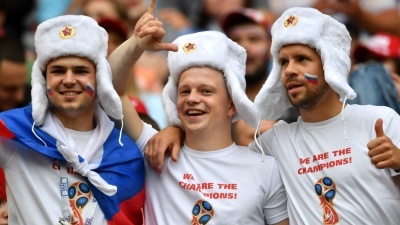 World Cup and investments to add 1% to #Russia GDP
By bne IntelliNews April 25, 2018

Russia spent RUB1.2 trillion ($19.4bn) on World Cup preparations, according to McKinsey making it one of the most expensive tournaments ever.  And this is a lot more than the previous estimates of $11.5bn-$13.2bn total costs, making the tournament by far the most expensive World Cup after the $6bn and $11bn spent in South Africa in 2010 and Brazil in 2014, respectively.

However, the costs are part of a wider brief of regional development investments as the Kremlin has a policy of using these large showcase events as a template to force regional governments to make badly needed investments into infrastructure that have long-term economic benefits. Following the circa $50bn invested into the Sochi winter Olympics the region has flourished and Sochi transformed into a thriving local economic hub.

The infrastructure built for the WC and increased tourist flow could add an additional RUB80bn-110bn annually, on top of RUB120bn-180bn annual investment, mainly in sport and transport infrastructure.

Alfa Bank's chief economist Natalia Orlova on April 25 said that McKinsey's estimates "is in line with our initial estimates, at end-2017; however, since then, a number of factors have changed for the worst."

First, Orlova believes that in order to ensure security in the 11 Russian regions, where the games are scheduled, the state authorities may limit or even stop local industrial productions, which would clearly neutralize any positive effect on growth.

Second, Alfa's economist suggests that recent tightening of sanctions against Russia and the cooling of relations between Russia and the UK may limit tourist flows to Russia and investment activity.

Alfa reminds that despite optimistic expectations in 2014-2015 after 2014 Olympic Games cumulative investment fell by 13% and still keeps below the pre-sanction 2013 level.

Alfa Bank is thus "now more sceptical about a positive World Cup effect on economic growth and reiterate our expectations of 1.0% y/y GDP growth this year," half below the yet unrevised 2.1% GDP growth projection of the Ministry of Economic Development.