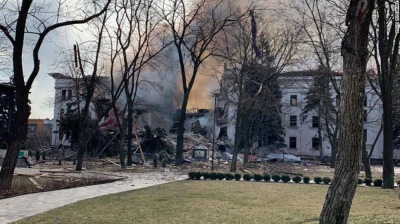 Satellite images clearly show the word “Children” painted on the ground at the front and the back of the Mariupol Drama Theatre, where up to 1,000 mainly women and children were sheltering. / wiki
By bne IntelliNews March 17, 2022

The Ukrainian government claims that Russia dropped a powerful bomb on the Mariupol Drama Theatre where hundreds of people, mostly women and children, were sheltering from the bombardment of the city on March 16.

The theatre was a well-known refugee point used by locals to avoid the shelling of the city. A satellite image released by the private US company Maxar Technologies shows the words “Children” painted on the ground in front and at the back of the building that was clearly visible from the air as of March 14. 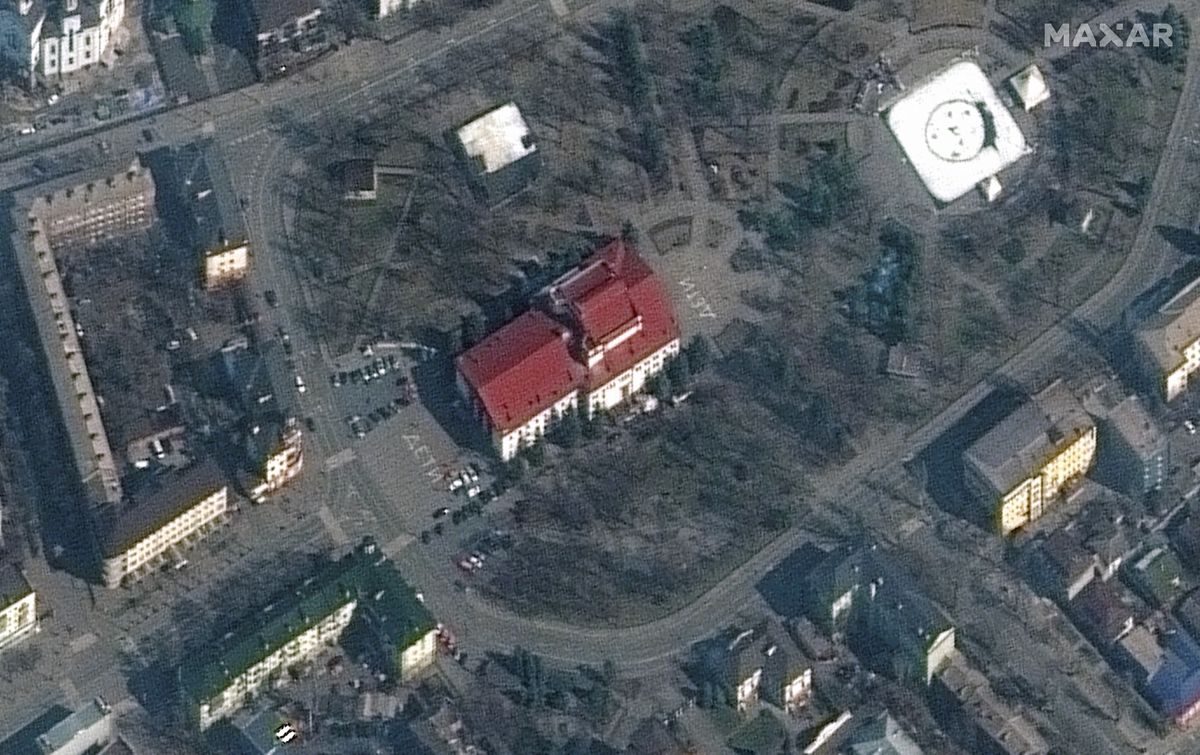 Mariupol has been in the front line of Russian aggression, which escalated and went into its fourth phase at the weekend. The city has been surrounded, making escape almost impossible, and Russian forces have been shelling it relentlessly.

The Ukrainian foreign ministry said many people were trapped in the theatre and accused Russia of committing a war crime, Reuters reported.

The number of casualties is not yet known but given the power of the bomb the authorities fear the worst. Video and photos of the wreckage circulating on social media show the building was almost completely destroyed.

"The plane dropped a bomb on a building where hundreds of peaceful Mariupol residents were hiding," the authorities said.

"It is still impossible to estimate the scale of this horrific and inhumane act, because the city continues to shell residential areas," the council wrote on Telegram as cited by CNN. "It is known that after the bombing, the central part of the Drama Theatre was destroyed, and the entrance to the bomb shelter in the building was destroyed," it added.

Mariupol City Council, who shared an image of the destroyed building, said Russian forces had "purposefully and cynically destroyed the Drama Theatre in the heart of Mariupol".

An adviser to the mayor of Mariupol, Petro Andruishchenko, said the theatre was the largest shelter in the city both "in number and size". Rescue workers have been trying to dig survivors out of the rubble, including pregnant women who were taking refuge at the theatre.

"More than a thousand people were hiding there" Andruishchenko was cited by CNN, but "the probability of getting there to dismantle the rubble is low due to constant shelling and bombing of the city," he added.

The bombardment of the city started on March 1 but civilians have struggled to escape. However, some 20,000 refugees managed to leave the city on March 15 during a brief lull in the shelling. More than 2.5mn Ukrainians have now fled the country since Russia attacked Ukraine on February 24.

"It is impossible to find words that could describe the level of cruelty and cynicism with which the Russian occupiers are destroying the civilian population of the Ukrainian city by the sea. Women, children, and the elderly remain in the enemy's sights. These are completely unarmed peaceful people," the city council said as cited by CNN. "We will never forgive and never forget.”

Russia denies it was responsible and said it does not target civilians. The Russian defence ministry said its forces had not struck the building and accused Ukraine’s far-right Azov Battalion of blowing it up, Russia’s RIA news agency said.

Azov troops have been active in the city and taken up positions in residential buildings, according to unverified reports on social media. Azov troops were also reportedly at the Mariupol maternity hospital that was destroyed by Russian shelling on March 9. However, the maternity hospital appears to have been largely evacuated before the strike. The official death toll according to the Ukrainian authorities was three dead, although a heavily pregnant woman, who was wounded in the attack, later died and her child was stillborn, according to reports. It has not been possible to verify the claims that Azov fighters were in the maternity hospital either.

Russia previously claimed that Azov troops had been preventing civilians from leaving the city and using them as a human shield.

At least 2,500 civilians have died in Mariupol according to the official estimates earlier this week, but that number has almost certainly risen dramatically as a result of the bombing of the Mariupol theatre. Hundreds of thousands of people remain trapped in the city, with officials warning those who remain are without electricity, water and heat.

In a glimmer of hope, peace talks between Russia and Ukraine seem to be gathering momentum as the gap between the two sides narrowed on March 16.