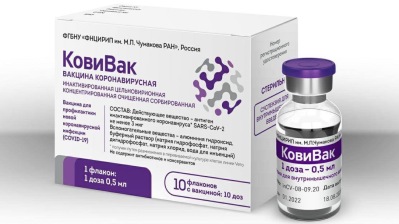 Russia has approved its third coronavirus vaccine CoviVac for domestic use, and production has been launched before trials complete.
By bne IntelliNews February 21, 2021

Russia has approved CoviVac, its third coronavirus vaccine, for domestic use, Prime Minister Mikhail Mishustin said on state TV, although large-scale clinical trials have not started yet.

The CoviVac vaccine is based on a highly successful vaccine Russia developed to prevent polio and could be more effective against mutations of the coronavirus (COVID-19), as it is a “whole-virion” vaccine that uses a deactivated form of the actual coronavirus that has been stripped of its ability to replicate. Production the vaccine has already been launched, although its release is only planned for March after preliminary trials are complete.

By contrast, Russia’s leading Sputnik V vaccine is a vector vaccine that has coronavirus RNA injected into a regular flu virus. The fact that the CoviVac vaccine is in effect identical to the wild version of the coronavirus is believed to improve its efficacy against a wider range of mutations of the original virus.

The CoviVac has been produced by the Chumakov Centre, which has a long pedigree of immunological work.

The Sputnik V vaccine was developed by Moscow’s Gamaleya Institute, which has previous worked on effective vaccines against Ebola, and it was also rushed through the approval process.

The pre-emptive approvals had raised concerns among some scientists in the West, but inoculations with those first two shots began on a mass scale in Russia only after trials were concluded and showed success.

A peer-reviewed study published in Britain’s The Lancet medical journal found that Russia’s Sputnik V vaccine is 91.6% effective and has put paid to much of the criticism of the skipping through the usual approval process by Russia. Sputnik V was approved in August and late-stage trials began in September. Mass vaccination was launched in December, after preliminary trial results showed the vaccine to be 91.4% effective.

To date the Kremlin claims that more than 2mn Russians have been vaccinated with at least the first dose of Sputnik V, Health Minister Mikhail Murashko said on February 10, although again, some question the official statistics.

The rollout of a second vaccine, developed by the Vector Institute in Novosibirsk, has also just begun in February.

The Chumakov Centre was founded in 1955 in St Petersburg by Mikhail Chumakov and is known for its work with US scientist Albert Sabin at the height of the Cold War to develop an efficive vaccine against a widely used polio vaccine, Reuters reports.

“The vaccine we have developed... reflects the whole history of Russian, as well as global, vaccine science,” the Chumakov Centre’s director, Aidar Ishmukhametov, said as cited by Reuters.

Only one other major vaccine candidate – India’s COVAXIN by Bharat Biotech – uses the “whole-virion” approach.

Like most of the other vaccines the CoviVac shot is given in two doses, 14 days apart. And like the other Russian vaccines, but unlike the Western RNA-messenger vaccines, it can be stored and transported in a normal fridge at temperatures of 2-8C, Deputy Prime Minister Tatiana Golikova said in a government briefing in January.

Testing of the new vaccine with a trial of 200 people aged between 18 and 60 began in September, Ishmukhametov told the state-run Vesti-24 news channel in late January. So far the vaccine has shown no side-effects, including no rise in temperature, Ishmukhametov said, reported by Reuters.

Confident of positive results, production of CoviVac has already begun and the first 120,000 doses have already been produced, but none will be released until after the trials that are expected to be completed in March, Mishustin said.

Then the Chumakov Centre could produce around half a million doses per month on its platforms, Ishmukhametov said at the weekend.

Deputy Prime Minister Golikova also announced over the weekend that Russia will produce 88mn vaccine doses in the first half of this year, including 83mn Sputnik V doses, according to Reuters.

CoviVac may also be used to boost the antibody count in those already infected by the coronavirus or administered to the elderly and those suffering from chronic dieseases, as it has a “milder” impact on the body, Albert Rizvanov, director of the Center for Precision and Regenerative Medicine of the Kazan Federal University, told TASS over the weekend.

"The CoviVac vaccine, developed by the Chumakov Federal Scientific Center for Research and Development of Immune and Biological Products of the Russian Academy of Sciences, is [a] better fit for secondary immunisation because it helps develop a comprehensive immune response to all coronavirus proteins, not only to spike proteins, like in the case of Sputnik V, or to certain spike protein peptides, like in the case of EpiVacCorona: i.e. if a person has had the disease and needs to boost his or her immunity after a certain period of time, this vaccine, I think, would be preferable. It would help restore the organism’s ‘immune memory’ and boost immunity when it begins to lower in ten to twelve months," he said.