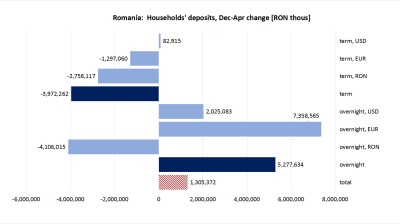 The volume of bank deposits held by Romanian households in local banks has increased by RON1.3bn (€260mn) in the first four months of the year to RON285.2bn, according to the end-April loan and deposit data released by the National Bank of Romania (BNR).

It is a relatively small advance, only 0.5% ytd for the stock of deposits and 7.5-fold less than the household deposits’ leap (RON9.8bn) seen during the same four-month period last year. But it is still a positive dynamic, at least in nominal terms.

Considering the much higher food and energy prices, the figures can hardly support the hypothesis of massive private consumption prompted by “inflationary behaviour” — although this remains one of the possible (negative) scenarios for the first part of the year.

To support this, the volume of new term deposits generated by households during Q1 (latest data available), was RON20.4bn — 5.2% more compared to Q1, 2021. Indeed, the vast majority of the new deposits have tenants of under one year — but this is broadly expected under current inflationary circumstances and given the still low deposit interest rates.

Consumer prices have advanced by 7.9% over the first four months of the year, the equivalent of a loss in excess of RON20bn incurred by households.

To prevent even more losses, households have cashed part of their term deposits, as the deposit interest rates lag well behind inflation, thanks to the BNR’s dovish policy.

But figures show that the money migrated to foreign currency — and was not just spent overnight.

When it comes to the overnight deposits, the local currency deposits contracted by RON4.11bn, while the stock of deposits in euros and other currencies (US dollars mainly) increased significantly by RON7.36bn and RON2.03bn respectively.

Turkish official inflation calculated at 83% y/y for September
1 hour ago
Poland’s inflation unrestrained in September at 17.2%, flash estimate shows
9 hours ago
Russia’s industrial output decline slows to only 0.1% in August
3 days ago
Poll shows Putin's popularity took hit in September but remained as high as 77%
3 days ago
Russia on track to have a record-smashing grain harvest
5 days ago