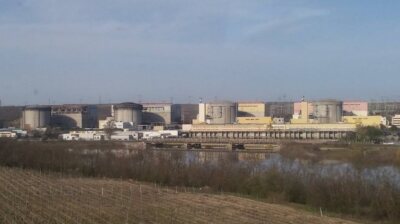 Bucharest has already scrapped a deal with China's CGN to expand its nuclear power plant at Cernavoda.
By bne IntelliNews March 4, 2021

Romania's government will analyse next week a decree that will exclude companies from non-EU countries that don't have trade agreements with the EU, including China, from participating in infrastructure projects in Romania, said Prime Minister Florin Citu.

"Today, I spoke with the government's general secretary and I am waiting for the emergency decree for next week's meeting," Citu said in an interview with G4media.ro published on March 3.

In early February, the government passed a memorandum on limiting the participation in tenders for companies from non-EU countries that have no trade agreements with Romania or the European Union. Deputy prime ministers Kelemen Hunor and Dan Barna were the first to reveal the existence of the draft decree.

Asked in February about the existence of a memorandum to exclude Chinese companies from tenders for highways and railways, the PM replied, as repoted by reported by Hotnews.ro: "No. If this is the case, then there must be a decree to change the public procurement law."

In his interview with G4Media, Citu also spoke about the sale of 5G licenses and the changes to the Offshore Law, two of the most important economic themes on his cabinet’s agenda. He also said he is waiting for the Digitisation Ministry to come up with the draft law for organising the 5G license sale — a deal that is also related to China because of a memorandum signed by Romania with the United States on avoiding unsafe suppliers of equipment.

In 2020, Romania also broke off its agreement with China General Nuclear Power Corp. (CGN) for building two new reactors at the Cernavoda nuclear power plant after the negotiations went cold. Instead, Romania plans to expand its sole nuclear power plant with a consortium led by US engineering firm AECom and including Canadian, French and Romanian partners.

The deal would "unshackle" Romania from China's "malign influence", US ambassador to Romania Adrian Zuckerman said in October, adding that "the [Chinese] communist party's control of every Chinese company, domestically and abroad, poses an existential danger."

Ukraine will receive $5.5bn in support from the US later this month
12 hours ago
John Malkovich to turn Skopje into Hollywood of the Balkans
12 hours ago
Envoy says start made on construction of Turkish attack drone factory in Ukraine
21 hours ago
Huge explosion rocks Russian airbase on the Crimean peninsula
1 day ago
Russia cuts oil flow via Ukraine's Druzhba pipeline, blaming sanctions for blocking transit payments
1 day ago