Tens of thousands of supporters of Romania’s ruling Social Democratic Party (PSD) gathered in Bucharest’s Victory Square on June 9 to protest against what they said were abuses in the justice system. According to estimations made by local media, the total number of participants was around 150,000-200,000.

The massive protest was held in the same square as the anti-government protests that have taken place for more than a year. The large numbers will help PSD leader Liviu Dragnea consolidate his position in the party, and will also signal that the PSD can still mobilise the masses.

The PSD did not seem to have a tangible reason for the protest. It has been planning a mass event for months, but has repeatedly changed the objective — it was initially supposed to be in support of the “traditional family”, then switched to a show of support for the government led by Viorica Dancila, and finally to the theme of “abuses”, an accusation made by the ruling party against the National Anticorruption Directorate (DNA) and President Klaus Iohannis.

The rally was thoroughly organised, with busses bringing in protesters from all around the country at the PSD’s expense, according to local newswires. The PSD reportedly used huge resources to transport people to Bucharest, using rented buses or extra train carriages.

Most of those present wore white T-shirts, as instructed by the organisers, PSD documents leaked to the media showed. Some were in a holiday mood at having a free trip to the capital, but many employees of state owned companies claimed on mitingcujapca.ro they had been forced to go to the Bucharest rally or risk losing their jobs.

The presence of PSD supporters from across the country was highlighted by banners carried by protesters stating the name of the county they had come from. Other printed placards, all alike and bearing messages such as “Down with the parallel state” and “Prosperity, not Securitate”, were carried by numerous protesters, and were provided by the organisers. This was in contrast to the banners used by the protesters in the anti-government rallies last year that attracted attention through their witty messages. At a previous, spontaneous PSD rally in February last year, protesters were mocked for carrying banners with grammar mistakes; this time the organisers were clearly taking no chances. 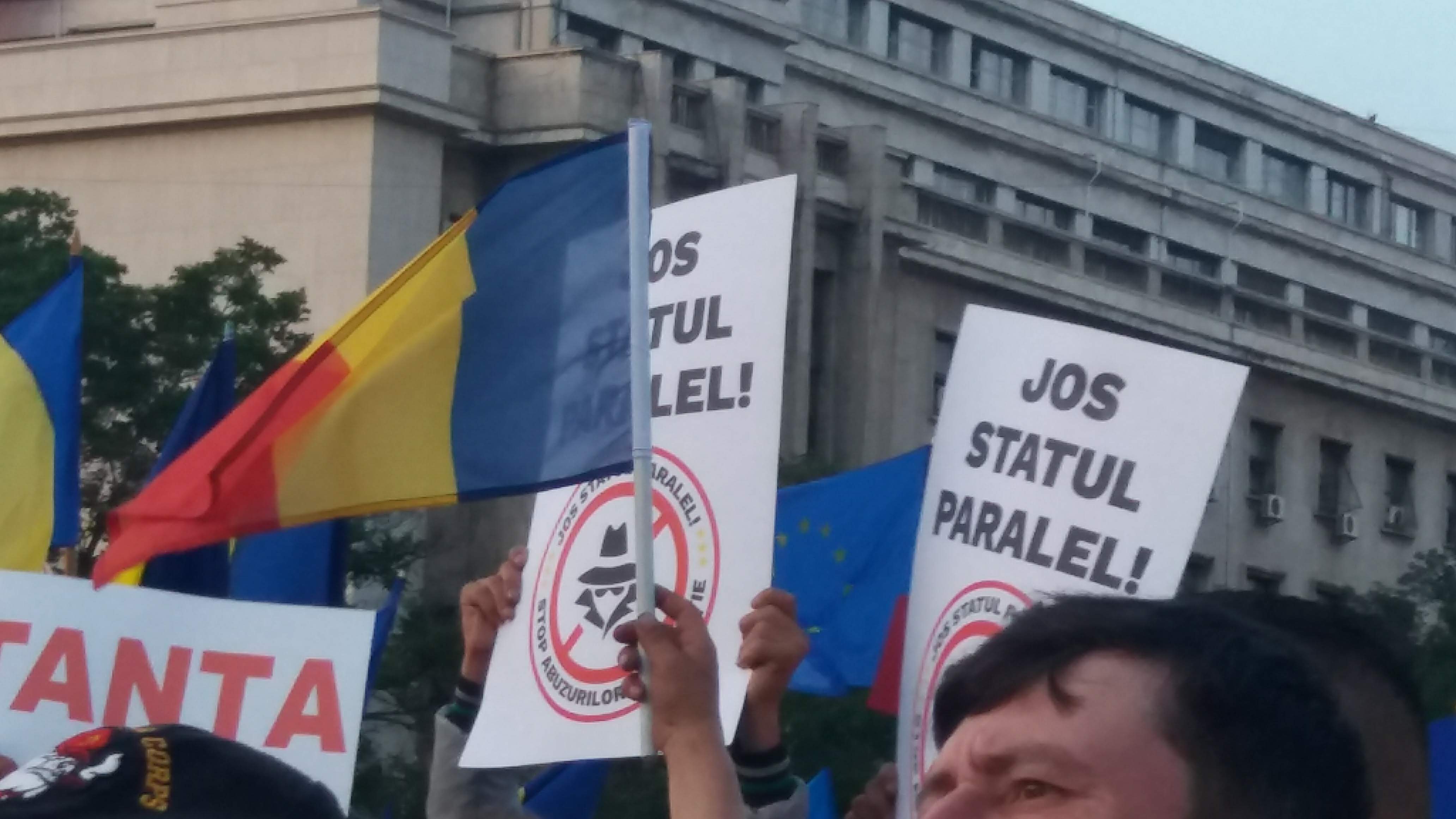 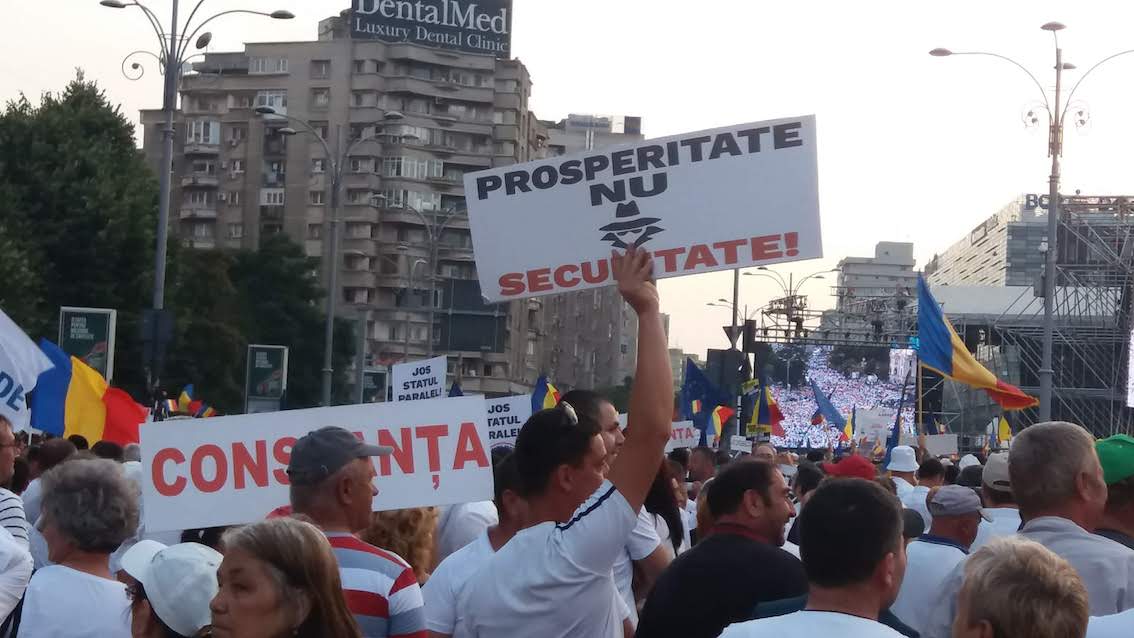 Several also carried Romanian tricolours and there were a few EU flags among them, while the main government building at the side of the square was covered by a new giant Romanian flag.

Against the “parallel state”

The protest came amid a growing constitutional crisis over the future of DNA head Laura Codruta Kovesi, under whose leadership charges were brought against dozens top-ranking politicians and businesspeople — including Dragnea, who is currently on trial in a corruption case. Meanwhile, the PSD claims the DNA and the security services are trying to establish power structures to rival the government, the so-called “parallel state”.

The PSD-led government has been seeking to dismiss Kovesi, and the Constitutional Court, which has more than once been accused of political bias, recently ruled that the president has to dismiss her. However, President Iohannis has not taken any steps in this direction so far, and if he maintains his position an attempt by the PSD to impeach him is likely.

Meanwhile, the party be plunged into crisis in the coming days, as the verdict in Dragnea’s trial is due to be announced on June 21 after being repeatedly postponed. He is accused of keeping two women on the public payroll when he headed the Teleorman county council when they were actually employed on PSD business. Should Dragnea be sent to prison this would inevitably spark a power struggle within the party and the departure of his protégée Dancila. The party’s majority in the lower house of parliament has already been eroded by the departure of a number of MPs to join a new party launched by former prime minister (and former PSD leader) Victor Ponta.

Speeches by PSD top brass were focused on the party’s fight against the parallel state, the “correct” justice and alleged abuses by prosecutors and the intelligence services against innocent people.

“It is a mean brotherhood, a dangerous one, which in fact wants to take democracy out of the game. This is the portrait of the parallel state,” Dragnea said, adding that the beneficiaries are those who lose the elections at the polls, but want to win them through the DNA and the intelligence service (SRI). However, much of his speech and those of his colleagues were drowned out in the huge square, where protesters repeatedly blew horns.

Most of the protesters were wary of speaking to the media. Those interviewed by bne IntelliNews said they were protesting against “abuses”, but could not name any specific abuses. Others said they wanted wage hikes and higher pensions, topics unrelated to the organisers’ aims.

“We have come to protest against abuses, but believe me, after hours of staying here in the heat I cannot give you an example. Hopefully, we will have better lives, they will increase our wages,” a woman from Calarasi county, who declined to tell her name, told bne IntelliNews.

Another protester told bne IntelliNews he was protesting against the abuses of the prosecutors and high-level corruption.

“All of them are corrupt, all of them are thieves,” he said. Asked if the statement applied to the governing coalition too, he said no, but did not rule out any possibility. “They have done good things so far,” he said.

The PSD protest ended at around 10 pm, with protesters leaving the square filled with empty plastic water bottles and banners. 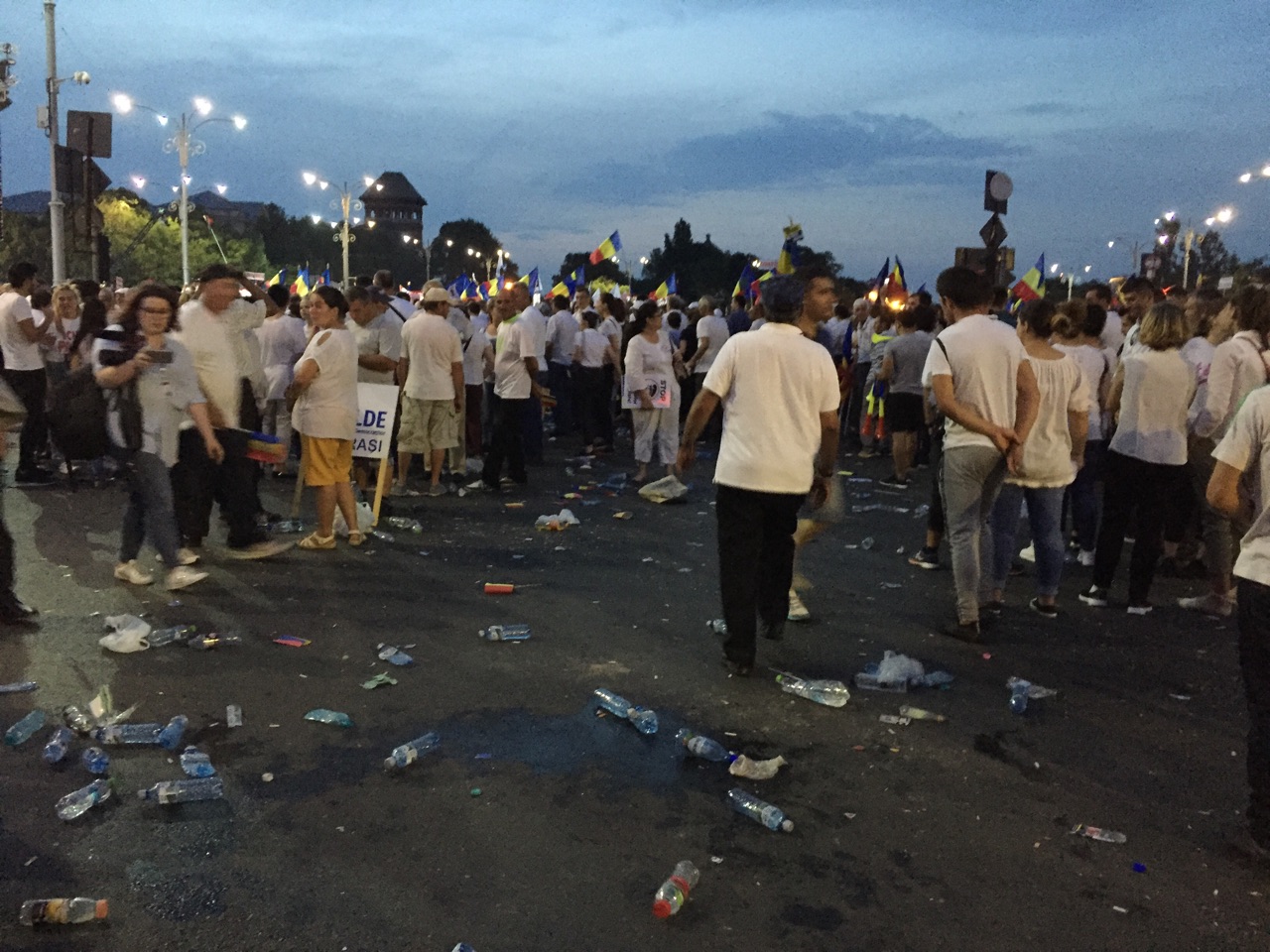 The party’s protest was one of the main events of Bucharest’s weekend of protests on June 9-10. The weekend started with the Bucharest Pride march of around 3,000 people though the city centre on the afternoon of June 9, and small counter-protest of around 100 people organised by the rightwing Noua Dreaptă. Many streets in the city centre were closed to cars, and police were deployed to keep the various protests apart and prevent clashes.