Romania’s opposition prepares to overthrow government, but no PM-designate in sight yet 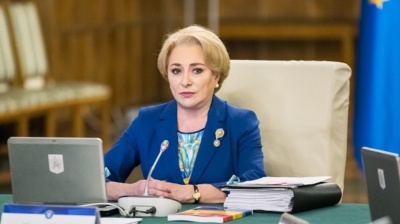 By Iulian Ernst in Bucharest October 2, 2019

While the opposition seems to have consolidated sufficient support in parliament to overthrow the government, it does not feature the necessary coherence to replace it with something else.

This is exactly what Dancila apparently plans to capitalise on: blame the opposition for causing political havoc and gain support ahead of the November presidential election. But even so, her chances of winning the election is very slim: in the most favourable poll for her, the voting intentions for President Klaus Iohannis are twice as large as those for Dancila (40% versus 20%).

The no-confidence motion has been signed by more than half of the lawmakers (237 of 465 MPs, four more than the majority), twice as many as required by the parliament’s regulations, because the PNL wanted to be sure the move will be successful.

"Two deputies of the parliamentary minorities, four deputies of the [ruling] Social Democratic Party (PSD), and an independent MP have signed this motion," announced the head of the PNL senators Raluca Turcan. The effort to overthrow the government led by Dancila is also supported by the Save Romania Union (USR), Popular Movement Party (PMP), the Democratic Alliance of Hungarians in Romania (UDMR), Pro Romania, and the PSD’s former junior ruling coalition partner the Alliance of Liberals and Democrats (Alde).

There is still a slim possibility that some of the signatories will change their minds and either vote for Dancila or fail to attend the joint session of the parliament’s chambers.

The PSD’s attempts to sabotage the vote make the calendar of the motion subject to fierce dispute: the PSD, still holding a dominant position in parliament’s leading bodies, plans to schedule the vote on a weekend.

While the motion is still highly likely to pass, resulting in Dancila and her cabinet losing most of their power, the formation of a new government backed by a stable parliamentary majority to replace the acting government resulted from a successful motion is less predictable.

Commenting on the no-confidence motion, Pro Romania president Victor Ponta said that, for the first time since 2012 (when he became prime minister following a similar a no-confidence vote against then-PM Mihai Razvan Ungureanu), a motion against the government is likely to pass. However, he added that he would support a “centre left” government, while most of the opposition parties declare themselves as “centre right” — a statement indicating the political turmoil to follow a successful motion against Dancila.

The Pro Romania party, which has nearly 6% of MPs, said it would not support a minority PNL cabinet, but would rather keep the PSD in power under another leadership. Notably, Ponta has once headed PSD and only left the party in 2017, when it was under the tight control of Liviu Dragnea, who is now in prison for corruption.

Under the baseline scenario, the political turmoil will prevail until after the presidential elections on November 10 and 24. The presidential elections, likely to result in a new mandate for Iohannis, cannot bring more clarity in parliament. But after the presidential campaign, the opposition parties may be able to find common ground, form a majority and back a government to rule until the term elections next autumn. Names of possible independent prime ministers like Emil Hurezeanu, Romania’s ambassador to Germany who has also cooperated with Social Democrats in the past, have been discussed. However, such a government of technocrats would struggle to resolve the major economic challenges expected next year: both internal (the pension law that stipulates major hikes next September) and external (slower growth environment).