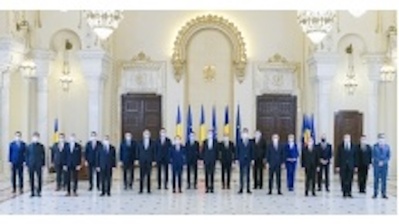 The Romanian parliament endorsed prime minister-designate Florin Citu and his government in their respective positions on December 23. The appointments were approved with 260 votes out of 455 MPs validated at the time of the vote (32 more than necessary), while there were 183 votes against.

President Klaus Iohannis had designated Romania’s then finance minister Citu to form a new government on behalf of a centre-right coalition of three parties formed around the National Liberal Party (PNL). The designation took place only one day before, on December 22.

Citu is a member of the Senate on the ticket of the PNL and he has served as minister of finance in the government of Ludovic Orban since November 2019.

He was also designated as prime minister in the spring of 2020, after the Orban government was overthrown following a motion of no-confidence, but he quit a few minutes before the vote to let Orban form another government and win lawmakers’ confidence amid the rising threat of the coronavirus.

The three political forces in the coalition have shared out the 18 ministries of the new government.

The reformist alliance USR-PLUS will control ministries with the potential to boost the development of the public sector: justice, European funds, health, transport, research and development and economy.

The Democratic Alliance of Hungarians in Romania (UDMR) was assigned key ministries as well: the development ministry that promotes regional development financed from national budget and environment, which is supposed to intermediate major financing for the Green Deal, as well as the ministry of youth and sports.

Backed by a fragile majority of 52.4% in parliament, the PNL, USR-PLUS and UDMR sealed a ruling agreement expected to remain in force for the coming four years.

This was despite the disappointing outcome of the 2020 general election: both major partners in the coalition, the PNL and USR-PLUS, got scores that were around 5pp lower than expected, while the Social Democrats (PSD) won biggest chunk of the votes and are in control of just over one third of the MP seats — a blocking minority that is of practical importance only in the case of major decisions such as the indictment of the president or amendment of the constitution.

At this moment, these are remote scenarios but they may occur during a four-year term — the populist AUR party aims to suspend Iohannis from his post and ultimately oust him. The ruling coalition might want to amend the constitution on several points: banning the appointment of candidates convicted of serious crimes from public positions, or even cutting down the number of MPs to 300.

Under a clause of the agreement, the signatory parties consent not to accept MPs of other parties — a clause broadly seen as authored by the smaller ethnic Hungarian party as a precaution. But the clause may erode the position of the ruling coalition if its own MPs decide to defect. At this moment, the ruling coalition holds 11 MP seats more than needed for a qualified majority in joint sittings. In the Chamber of Deputies, the margin is even smaller: four out of the 330 votes. However, the ethnic minorities’ deputies (18) have traditionally backed the ruling coalition by default — once it is established.