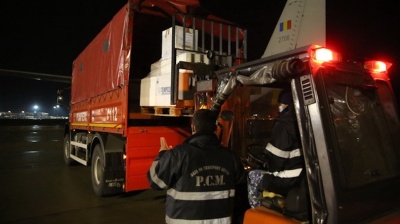 The Romanian Air Force flew in 5,200 doses of monoclonal antibodies from Milan as part of Italy’s support for Romania during the latest wave of the pandemic.
By bne IntelliNews October 14, 2021

Healthcare officials in Romania have warned that the country is running out of intensive care beds amid record numbers of new coronavirus (COVID-19) cases. Military hospitals are being opened and neighbouring countries have stepped in to help.

In the last two weeks, Romania has repeatedly reached record high numbers of new cases. As the daily tally of new cases topped 15,000 in the first week of October — considerably worse than in previous waves of the pandemic — officials reported that intensive care wards were already full. Since then the number of new cases passed the 16,000 mark for the first time on October 12, when a record 442 deaths were also reported.

President Klaus Iohannis has described the situation as “catastrophic”.

There are reports on social media of queues of ambulances outside hospitals in the capital Bucharest and the city of Iasi in northern Romania.  Earlier in the month, all non-emergency surgeries were suspended to ease pressure on the health system.

“If the current flow [of patients] continues, in one or two days the health system will collapse because we already don’t have enough place to accommodate the sick,” Catalin Apostolescu, director of Matei Bals hospital in Bucharest, told AFP. He added that the hospital was at “110 percent” occupancy.

Part of the blame for the crisis has been placed on the vaccination rate in Romania, one of the lowest in Europe. Despite efforts by the authorities to persuade people to get vaccinated, only around one third of Romanians have received vaccinations against coronavirus.

Even amid the devastating fourth wave, many Romanians are still not keen to take the vaccine. A survey by Reveal Marketing Research carried out in early October showed that six out of ten Romanians do not intend to get vaccinated, reported Romania Insider. Respondents’ reluctance to receive vaccines were based on concerns about efficacy, safety and side effects.

Making the situation even worse, there have been three deadly fires in Romanian COVID-19 hospitals since the start of the pandemic. In the latest tragedy, seven out of the ten patients in an intensive care unit at Constanta hospital in Romania died after a fire broke out in the morning of October 1.

With Romania struggling to cope with the crisis, other states in the region have offered to help.

Hungarian Foreign Minister Peter Szijjarto said on October 13 that 50 Romanian patients in need of intensive care will be treated in two Hungarian hospitals, newswires reported. The logistics of transporting them to hospitals in the cities of Szeged and Debrecen will be worked out in the coming days.

According to Szijjarto, Hungarian officials are in close contact with Romanian Deputy Prime Minister Kelemen Hunor and Health Minister Cseke Attila — both members of the Democratic Alliance of Hungarians in Romania (UDMR) — on further support for Romania.

The previous day, Italy sent 5,200 doses of monoclonal antibodies that were transported to Romania on a military plane, the Romanian Ministry of Defence announced.

Within the country, the Ministry of Defence said on October 14 that the Military Emergency Clinical Hospital in the southern city of Craiova will open as a COVID-19 support hospital from October 15. It will provide 10 beds for the treatment of mild and medium cases and two intensive care beds.

All 11 military hospitals and the three mobile medical units in the major cities of Bucharest, Constanta and Timisoara are in the process of expanding their operational capacity, authorising new beds for treating patients with COVID-19. The medical network of the Ministry of National Defense will increase its treatment capacity to 388 patients with mild, moderate and critical forms of COVID-19, the statement said.

Within Romania, the collapse of the centre-right ruling coalition in September has hampered efforts to tackle the situation. Prime Minister Florin Citu lost a confidence vote earlier this month, and now heads an interim government while talks between political parties on the formation of a new government are ongoing. However, there is no obvious way out of the political crisis, which distracts attention from dealing with Romania’s urgent healthcare crisis, and the country may be heading towards its first early elections in decades.

A new wave of coronavirus infections started this summer in Southeast Europe, including Romania, as the delta variant of the virus spread across the region. Infections in some countries including Albania, Bosnia & Herzegovina, Croatia, Montenegro, North Macedonia and Slovenia appear to have peaked, but they are still on the rise in Bulgaria and Moldova, and have started to increase again in Serbia, despite Belgrade’s much-publicised vaccination drive.

US warns Belarus to keep its commitment to neutrality
7 minutes ago
US Secretary of State Blinken in Kyiv, warns Russia could attack “at very short notice”
1 hour ago
Defence agreement between Slovakia and the US divides politics and society
13 hours ago
Uzbekistan launches production of military drones
19 hours ago
New impetus between Bulgaria and North Macedonia at top-level Skopje meeting
1 day ago