Romania’s bourse over 30% above pre-crisis peak 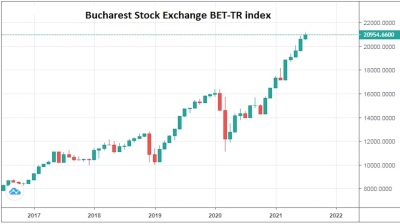 The BET-TR index, Bucharest Stock Exchange’s (BVB’s) blue-chip index that also reflects the dividends distributed by the companies, is close to 21,000 — over 30% above the 16,000 peak reached in January 2020 before the crisis and 75% above the lowest level where it dropped during the lockdown. The market remains buoyant.

The BET-TR index, which also reflects the dividends distributed by BET companies, advanced even more — by almost 27% ytd, and by almost 50% y/y.

The shares of Banca Transilvania rose by 2.39% over the last week and remained the most liquid securities on the main segment of the BVB last week as well, generating transactions of RON45mn (out of RON200mn BVB turnover in the whole week).

Real estate developer One United Properties (newly listed), boasted trades worth RON29mn, followed by BRD bank with transactions worth RON21.6mn and a price gain of +2.40%.

Among the companies with a sharp change in capitalisation, the prices of construction materials producer Teraplast contracted by 6.67% last week and those of Artego, a conveyor belt producer and one of the largest manufacturers of technical rubber articles in the world, by 6.3%. The shares of the construction company Comcm boasted 14.4% rise and those of SIF Hotels rose as well by 12.6%.

The approximately 280 companies listed on the AeRO segment of the BVB ended June with a cumulative capitalisation of RON10.3bn, up 46% compared to the same month in 2020, driven by higher prices but also in the context of new entries in the trading ring.

The largest company listed on the AeRO segment is Chimcomplex Borzeşti Oneşti (CHOB), which owns the Oltchim and Borzeşti chemical platforms, with a market value of approximately RON2bn. CHOB shareholders recently approved its transfer to the main market.

It is followed by Alum Tulcea with a capitalisation of RON253mn, Bucur Obor with RON250mn, Agroland Agribusiness (a company that was not listed in June 2020) with RON232mn and Comvex Constanta port operator with RON200mn.