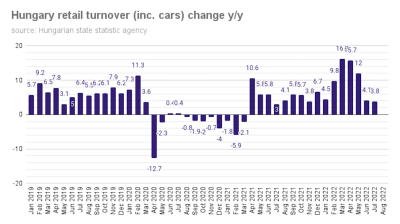 Retail sales growth in Hungary slowed to 3.8% y/y in July (chart), down from 4.1% in the previous month, the Central Statistics Office (KSH) announced on Monday. Adjusted for calendar year effects, retail sales increased by 4.3%. On a monthly basis, turnover of shops grew 0.5%.

The breakdown by sectors shows that fuel sales were the driver of growth during the month, as sales jumped 27.6% on an annual basis. Food sales on the other hand contracted 2.9% y/y as food inflation surged to 30% y/y in the first seven months. Non-food sales edged up 3.2% y/y in the same period.

Retail sales got a boost from the pre-election transfers between February and May, but its impacts have faded.

Food sales accounted for 47% of the total, non-food sales for 34% and sales at petrol stations for 19%. Online and mail-order sales rose 2.9%.

In the first six months, retail sales rose by 9.3%, according to both adjusted and unadjusted data, lifted by massive wage growth and the government’s pre-election handouts.

Analysts are projecting strong growth in the first half to slow considerably as soaring energy prices and the impact of the fiscal tightening of the government will reduce the disposable income of households.

The rise in overhead costs, companies passing on windfall taxes and the possible phase-out of price caps will contribute to the slowdown of the sector, Erste Bank said in a note.

Retail sales growth could continue to decelerate in the coming months due to rising energy bills and rising inflation, according to Magyar Bankholding analysts, who attributed the drop in food sales to the recovery in the catering sector as more consumers eat out rather than stock up at the supermarket.

Households have begun to adjust their spending patterns to higher inflation, and the impact of fiscal tightening, the phase-out of energy subsidies and the potential unwinding of price caps.

Virovacz did not rule out that economic output will decline in the third quarter on a quarterly basis, as consumption has been a major driver of Hungary’s 7.3% growth in the first half.