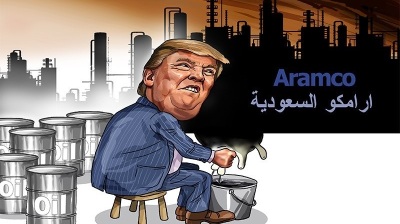 Donald Trump has been urging the Saudis to pump more oil to make up for Iranian barrels that his sanctions will drive from the market. He's also made a play to win the proposed IPO of Saudi oil giant Aramco for the NYSE. / Tasnim news agency.
By bne IntelliNews November 1, 2018

Reports were emerging on November 1 that India and South Korea have agreed outline deals with the US that if confirmed will allow them to keep importing quantities of Iranian oil despite the impending attempt by the White House to put in place a worldwide embargo on crude shipments from Iran.

Asian officials with knowledge of the matter were cited by Bloomberg, although its report said no final decision on waivers had been made and an announcement was unlikely to come before the US sanctions aimed at Iranian oil, gas and petrochemical exports takes effect on November 5.

There has been concern in the Trump administration that the anticipated big squeeze on Iranian crude could drive up oil prices in advance of the US midterm elections, which will take place on November 6. Anxieties that Saudi Arabia may have exaggerated how much extra oil it can pump to make up for the loss of Iranian volumes have added to market jitters. Given the need to maintain market confidence, the reliability of reports on the extent of likely waivers might thus be called into question. Administration officials might be tempted to try and talk down the oil price to assauge the US motorist.

China has made the case that there is no reason why it should respect the sanctions given that they have not been approved by the United Nations.

India has dwelt on the impracticality of ending all shipments, while Turkey, which is still stubbornly involved in rows with the US over a range of issues including resolving tangled aspects of the Syria conflict, has asked what right Washington has to tell Ankara not to take convenient oil and gas supplies from its next-door neighbour. Turkey has few natural energy resources of its own.

Toeing the line
Given its reliance on the US when it comes to dealing with the threat posed by North Korea, South Korea will almost certainly toe the line when it comes to the energy sanctions, but a particular problem for Seoul is that many Korean plants are specifically designed to process Iran’s South Pars condensate, an ultra-light oil type.

Trump has been playing hard ball with the conditions of his attempted Iranian oil embargo, given that it is a crucial plank of his strategy to asphyxiate the Iranian economy to force Tehran to come to the table to renegotiate is Middle East policies and activities, including participation in the Syrian and Yemen conflicts, directly or by proxy.

India’s payments for the Iranian oil received under waivers would go into a local escrow account, which could be used for barter trade with the Middle East producer, one of the people cited in the news agency report said. No money would directly go to Iran.

On October 30, US State Department spokesman Robert Palladino said during a press briefing that while the objective of Washington was still to get buyers to cut Iranian oil purchases to zero, officials were prepared to work with countries that are reducing their imports on a case-by-case basis.

“We don't want to harm friends”
Several countries “may not be able to go all the way to zero” right away on purchases of Iranian oil after the energy sanctions take effect, White House National Security Advisor John Bolton said on October 31 at an event in Washington, news agencies reported. "We want to achieve maximum pressure, but we don't want to harm friends and allies either," Bolton told the Hamilton Society, indicating a possible softening of policy.

Companies that go ahead and buy Iranian oil volumes without White House approval run the risk of being shut out of the US financial system under secondary sanctions. Even the Chinese government is said to have told some state companies to cease imports of Iranian oil in order to avoid risks.

How much a role smuggling might come to play in maintaining Iranian oil flows is open to question.