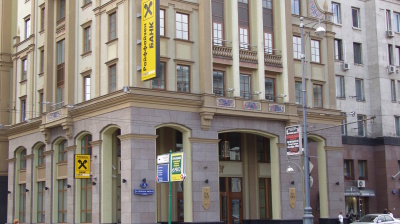 RBI draws around one third of its profits from Russia.
By bne IntelliNews February 28, 2022

Shares in Raiffeisen Bank International (RBI) have crashed 30% since Russia invaded Ukraine – both countries in which the Austrian bank has sizeable operations.

In a statement on February 28, RBI – the most exposed Western bank to the Russian market – said it could not provide a final picture of the impact of sanctions on its business since they were being extended on an almost daily basis. The group said its banks in Ukraine and Russia were still operating normally.

"The sanctions are being extended almost daily and therefore no final assessment can be given yet," Raiffeisen said. "They are tough and far-reaching in their impact on the financial markets and the real economy. The impact on the RBI Group is being analysed."

RBI, the second-biggest cross-border bank in the CEE region by assets, claims a market share of 1.3% in Russia, slightly higher than its nearest competitors, Italy’s UniCredit and France’s Societe Generale. It has been present in the market since 1996 and caters to mainly blue-chip corporate clients.

The market has been its most profitable, representing around one third of its €1.42bn net profit last year. It has €11.6bn in loans in Russia and €2.2bn in Ukraine, according to its website.

The bank had already set aside €25mn because of the deteriorating relations between Russia and Ukraine. It also said that it had prepared “crisis plans” in case of an invasion.

All banks in Russia face huge problems following the imposition of Western sanctions over the past few days, as well as the move by the Russian central bank to more than double its main interest rate to 20%. The ruble has sunk, falling to more than 108 to the dollar at the start of trading on February 28. Banks will inevitably have to make big provisions for the impact of the looming economic crisis on their clients.

The three Western banks’ Russian subsidiaries have not been included in the Western sanctions lists, which have focused on domestic players, and they have not been removed from the SWIFT global payments messaging system.