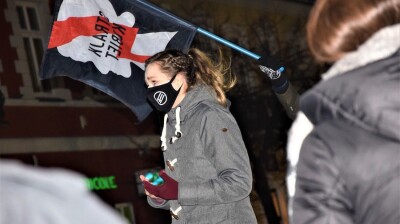 Thousands of protesters took to the street on Wednesday night after Poland’s rightwing coalition moved ahead with a near-total ban on abortion.
By Wojciech Kosc in Warsaw January 28, 2021

Thousands of protesters took to the street on Wednesday night after Poland’s rightwing coalition moved ahead with a near-total ban on abortion.

The government published the ruling of the Constitutional Tribunal, which in October banned abortion in cases when the foetus is ill or damaged. That was the last formal step to make the ban official and immediately effective. The government has held up the publication after mass protests erupted in October after the Tribunal’s ruling.

“We are calling on you to take to the streets,” Women’s Strike leaders said last night. “We’re going to give you hell,” they told the government.

The Tribunal, which the co-ruling Law and Justice (PiS) party stacked with loyalists, making it effectively a government body, ruled in October on a motion submitted in 2019 by a group of conservative lawmakers.

Terminating pregnancy in case of foetal defects is against Poland’s Constitution as it violates the right to life, the Tribunal said. After the ruling, Polish women will only be able to have an abortion in cases of rape, incest, and if the life of the woman is in danger.

But it was abortion due to foetal abnormalities that made up nearly all of some 1,100 legal abortions performed in Poland last year. Women’s rights organisations estimate that the real number of women having an abortion in Poland is between 100,000 and 150,000.

PiS has long tried to live up to the wishes of conservative and Catholic church-linked parts of its electorate by tightening Poland’s already stringent abortion laws. But an attempt to do so fizzled out in 2016, as the ruling party backed down when faced with mass protests.