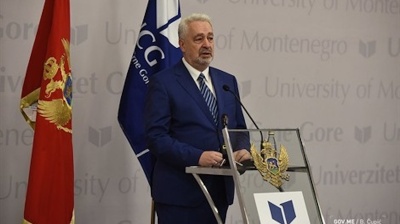 Protesters attacked Montenegrin Prime Minister Zdravko Krivokapic’s car on the motorway from Niksic to Podgorica on April 8, he wrote on Twitter.

Dozens of people, who were travelling to the capital Podgorica to join a protest against the government, pushed the prime minister’s car, in which his daughter was travelling.

“Today was attacked an official vehicle where my daughter, who is protected person, was travelling. As a father, I shall never forget her tears and fear. As a prime minister, I shall not allow you savagery and lawlessness! There will be law and order in the country that you are not used to. You shall see that soon,” Krivokapic wrote.

A video from the incident posted on YouTube shows a group of people, some carrying flags, surround the car. Two climbed onto the bonnet but tumbed to the ground when the car accelerated. "Montenegrin patrios wanted to protect their country from the new pro serb government! A vehicle from the new government hits two old patriots. The man with the yellow jacket broke his hip," says the caption.

The police said that the attack was documented and will be investigated. The protesters were stopped by the police near the village of Bogetici. According to Tanja Knezevic-Perisic, the leader of the Patriotic-Revolutionary Union of Montenegro, which was the formal organiser of the protest, they will file claim against the police that stopped them, and against the minister who issued the order.

Meanwhile, Krivokapic accused President Milo Djukanovic, who is also the leader of the opposition Democratic Party of Socialists (DPS), of being behind the protests, organised against the government’s plan to scrap a scheme to grant citizenship to foreigners in return for investment.

“I call on President Djukanovic not to destabilise the country and to call on people who he has taken out to the streets to return home,” Krivokapic wrote.

“The riots he produces will not stop the hand of justice and the rule of law! Both the prosecutor's laws and the decision to change the criteria for acquiring citizenship will be adopted in the interest of the state of Montenegro and its citizens, and no gatherings organised by the DPS will stop that,” he said.

Krivokapic also called on people to not respond to provocations.

“It is extremely immoral for Prime Minister Krivokapic to insinuate that I am organising protests that he does not like. Attempts to cover up all their ignorance, lack of commitment and impermanence by blaming the former government for everything are in vain,” he wrote on Twitter.

Meanwhile, a few hundred people gathered in front of the government building to protest against the adoption of the legislation, but the protest ended within a few hours, daily Vijesti reported.