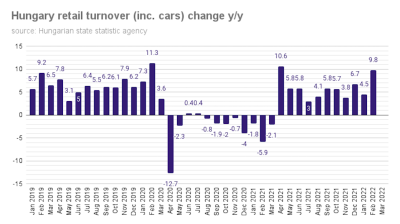 Retail sales in Hungary rose 9.8% y/y in February, the fastest rate seen in almost a year, data released by the Central Statistics Office (KSH) on April 6 show. Retail sales rose on the back of fiscal transfers and rising wages, and an extra month of pensions. The sector’s contribution to GDP may be positive this year.

Families raising children got tax refunds of over HUF600bn (€1.6bn) and pensioners got an annual bonus equivalent to a full month's pension in February. Besides that, marked wage growth, growing employment and bonuses for soldiers and the police lifted retail sales.

Sales growth may also have been supported by retail tourism due to price caps on vehicle fuel and some staples, and by purchases by and donations for war refugees from Ukraine, KSH added. KSH put full-year retail sales growth at over 9%. Takarekbank projects 9% growth.

Consumption would drive GDP growth in H1, presenting "big challenges" for monetary policy as the impact of the war exacerbates the already high inflation environment. Higher prices could cause consumption to slow in H2, according to forecasts by Erste Bank.