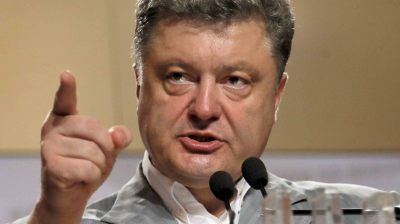 Poroshenko is in trouble. Three quarters of Ukrainians think the country has lost its way. / wikicommons
By bne IntelliNews April 27, 2018

Ukrainian President Petro Poroshenko’s popularity ratings are in free fall as three quarters of Ukrainians think the country is headed in the wrong direction, pollster Rating sociological group said on April 26. A second elections poll, also released on April 26, shows public support for Poroshenko and his Solidarity party has collapsed since the start of the year.

At the same time the popularity of opposition leader Yulia Tymoshenko, Ukraine’s former prime minister and head of Batkivshchyna (Fatherland) party, continues to be main beneficiary. Tymoshenko is now the clear favourite to win next year’s presidential election. Her populist Batkivshchyna party is also now the leading political force in the country.

Among those who will participate in the March presidential vote and are decided, 14.2% support Tymoshenko, 10.9% support pro-EU former defence minister Anatoliy Grytsenko, 9.4% support Russian-oriented natural gas trader Yuriy Boyko and only 9.3% support Poroshenko. More than 21% of those intending to vote are undecided, Concorde Capital said in a note.

Among decided voters planning to vote in the October parliamentary elections, 15.3% support Fatherland, while Grytsenko's Civic Position has 9.7% support, Russian-oriented Opposition Bloc has 9.6%, the yet-to-be-registered People’s Servant party has 9.0%, Russian-oriented For Life has 8.2%, the populist Radical Party has 8.0%, Poroshenko’s Solidarity party has 7.6% and the pro-EU Self-Reliance party has 5.2%. More than 18% of those intending to vote are undecided.

Voters’ disappointment in their government and their view on the country’s progress is now on a par with the low ratings just before the Euromaidan protests in 2014, the pollster said.

"As many as 75% of Ukrainians feel that the country is headed in the wrong direction," the group’s founder Igor Tishchenko said at a press conference, reports Tass.

"The peak [in optimism] happened after Maidan. At that time, 34% said the country was going in the right direction, while 48% believed Ukraine was headed in the wrong direction. That is, we are now back to the figures we had before the Maidan (unrest)," Tishchenko said.

A total of 70% of respondents believe that the country needs radical changes, while 10% chose "to leave everything as it is now," and 16% noted that they wanted everything to be "the way it had been before," Interfax reports.

Poroshenko is backing into a corner, which has led some analysts to say the chances he will call early snap-elections this year are rising if he can find a suitably upbeat moment. But increasingly Poroshenko will need some major achievement to counter the souring mood amongst both his own people and the international donors on which Ukraine relies.

“Poroshenko is in trouble and he needs a new political strategy to pull himself out of this ratings collapse. Unfortunately, his recent campaign to get canonical recognition of the Ukrainian Orthodox church (which began on April 17, during the time this poll was conducted) won’t do the trick, as voter concerns are far more pragmatic. Workers want better wages, while entrepreneurs want functioning courts and more favourable tax conditions. Tymoshenko has understood this, which is why she has pulled out in front of the pack,” Zenon Zawada of Concorde Capital said in a note.

“We can’t help but notice that Poroshenko’s ratings collapse began weeks after the forced deportation of [former Georgian president and Odessa governor] Mikheil Saakashvili, which was conducted outside the courts and therefore widely criticised. Public trust in Poroshenko had already been low, but this tactic of suppressing dissent – which put an end to the downtown protests – might have come at a price too high,” Zawada added.