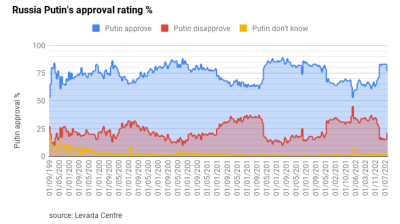 Russian president Vladimir Putin's approval rating took a mild hit in September but it remains very high at over 77%. And in general the majority of Russians believe the country is going in the "right direction" by a wide margin. / bne IntelliNews
By bne IntelIiNews September 30, 2022

However, in September it took its first hit and fell to a still very high 77%. The Levada poll was concluded in September before the rout in the east of the Russian army by Ukraine as part of its highly successful counter offensive. (chart)

Prime Minister Mikhail Mishustin has also enjoyed an uplift in his approval ratings, with the war lifting his rate from the mid-50s into the range of 69-72% since the war started, although his approval rating was already rising at the start of the year thanks to his competence in the job. But Mishustin also suffered a small setback in September, with his rating dropping to 66%. (chart)

The performance of the government has been the biggest winner from the war. Previously the government approval rating was evenly balanced between approval and disapproval in an almost 50:50 split. For most of last year the net balance was a few percentage points to the negative side, but that flipped into a small net positive at the start of this year.

But since the war started the approval of the government has markedly improved, with the approval rating jumping from 55% in February to 70% in March after hostilities began. Since then the government’s approval has stayed in the range of 68-71% approval and 26-29% disapproval, its best performance for years. September also knocked the ratings back to a 63:34 split, but still comfortably left the government in positive territory. (chart)

However, in May, the first survey after the war started, those numbers changed to 16% that thought there could be political protests and only 9% said they would participate if they happened. The August survey produced similar numbers: 17% and 11% respectively. (chart)

As for the propensity for protests with economic demands, before the war respondents that thought they might happen were in the high-20s to 30 band and those that would participate were in a band of low- to mid-20s.

But after the war started those that thought protests could happen fell to 17% in May and 20% in August, with those that said they would participate down as well to 14% and 16% respectively. (chart)