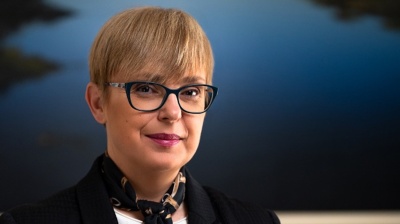 Natasa Pirc Musar leads the polls ahead of the Slovenian presidential election runoff. / predsednica.bo
By Valentina Dimitrievska in Skopje November 10, 2022

The polls in Slovenia showed that Natasa Pirc Musar, an independent candidate supported by the country’s ruling parties, is leading her rival, the rightwing politician Anze Logar, a few days ahead of the presidential election runoff on November 13.

After the state election commission reveals the first results on Sunday evening it will be known if Slovenia will get the first female president in its history. In the latest poll conducted by Valicon for RTV Slovenia Pirc Musar had the support of 43.5% of the electorate versus Logar’s 34.2%.

In the first round, the situation was opposite, as Logar, a former minister of foreign affairs, won the largest share of the votes, 33.95%, followed by Pirc Musar with 26.88%.

Pirc Musar, a 54-year-old lawyer who has worked for Slovenia-born former US first lady Melania Trump, is in the lead after gaining support from sympathisers of all three ruling parties, PM Robert Golob’s Freedom Movement as well as the Slovenian Democrats (SD) and the Left. Freedom Movement had no candidate for president while the candidates of the SD and the Left did not get enough votes to qualify for the second round.

Logar, a 46-year old economist, is a member of the opposition Slovenian Democratic Party (SDS) led by former PM Janez Jansa, but entered the race as an independent candidate with the support of 13,000 voter signatures. However, he is backed by supporters of his SDS party and New Slovenia (NSi).

“It's true that in the second round I got the support of Freedom Movement and SD. I'm happy, of course, but I didn't ask for it. But in a way, this support is logical,” Musar said in a radio duel on RTV Slovenia on November 9.

Logar said that in addition to SDS and NSi, he is also supported by the Greens, which, according to him, is an important indicator of support for his green transition programme.

Musar believes that as a non-party candidate, she has an advantage over Logar.

“I am happy when he [Logar] says that he will be the president of all and that he has always done well for Slovenia, and knew how to find a consensus, but unfortunately the party from which he comes has never been able to do so in 32 years of Slovenia's history,” Musar said.

She added that a consensus between leftwing and rightwing parties has not yet happened in Slovenia.

“But I myself am optimistic, I believe that as president I can unify left and right politics, especially on strategic topics that are necessary for the development and breakthrough of Slovenia,” Pirc Musar said.

Pirc Musar welcomed the new EU proposal for an act on migration and migration policy.

“This is something on which the European Union failed in 2015 and 2016 during the worst migrant crisis. However, member states are aware that solidarity between countries within the EU is what will keep the EU,” she said.

“After Russia's attack on Ukraine, I can confidently say that this crisis united the EU members, connected them and made the EU more effective,” Logar said.

Nearly 1.7mn voters are eligible to cast a vote, of which 107,107 have permanent residence abroad.

Incumbent President Borut Pahor was ineligible to run for a third mandate for the presidency, which has largely formal powers. The mandate of the new president will begin on December 23.