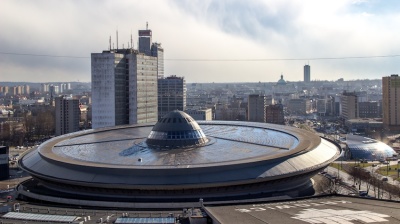 Katowice, in Poland’s coal mining region of Silesia, was the only city won by a PiS-endorsed candidate.
By Wojciech Kosc in Warsaw October 26, 2018

Poland's two biggest political rivals both claimed victory in last Sunday’s local election. Yet, backstage, both must know the outlook for next year’s general vote has only become cloudier.

The main conclusion from the vote, which attracted nearly 55% of voters, the highest turnout in the history of local elections in Poland, is that the ruling party’s apparent total control in Poland is not the case. But neither did the liberal opposition and the crisis-stricken left deliver a strategic blow to the ruling Law and Justice (PiS).

That sets the scene for the fiercest-ever campaign in the run-up to the general vote in the autumn of 2019, preceded by the European Parliament election in May.

The ruling populists from PiS made undisputable advances last Sunday. PiS will have power in at least six Polish regions and a seventh one if they are able to agree a coalition with independents. That compares very favourably to just one after the previous election in 2014. PiS also gained a staggering 2mn more voters.

But PiS lost badly in cities. Of the biggest cities, a PiS-endorsed candidate only won the mayoral race in Katowice, a 300,000-strong industrial city in Poland’s coal mining region of Silesia.

Elsewhere, it was independents or candidates of the liberal Civic Coalition (KO) that won, often by a huge margin. KO’s Rafal Trzaskowski made headlines by sweeping past PiS’ Patryk Jaki in Warsaw 56% to 28%, reportedly boosting tension along the government’s internal fault lines.

Arguably, KO faces a more daunting task if it wants to win next year. The liberals need to figure out how to win outside urban areas, while PiS’ retaining dominance in small-town and rural Poland should be enough to hold on to power for another four years, at least in theory.

PiS even appears likelier to achieve a better result in 2019. Their gains in regions – while impressive – were limited by the good result of agrarians from PSL, a traditionally strong party in the local vote.

But PSL is much weaker in general elections and anything more than a single-digit result would be a surprise. A large chunk of PSL voters is expected to vote PiS next year, boosting the populists’ tally.

The liberals’ challenge will be to not let PiS win by mobilising undecided voters for an even higher turnout. They could also run in a coalition with PSL - and maybe the main leftist party SLD - in order to max out gains from Poland's proportionate election system.

Poland’s currently disarrayed left could also step in by creating a bloc uniting SLD, the Podemos-styled Razem, the Greens, and city activist movements, possibly under the auspices of Robert Biedron, a charismatic former mayor of Slupsk and Poland’s first openly gay politician.

That could give liberals and the left a combined 30%-40% of the vote, likely pushing PiS out of power if – and a big if at that – if the left can work together and then compromise with the liberals on what a post-PiS Poland should look like.

There are risks to that scenario, however. For one, mobilising an even higher turnout could be difficult. The 2015 parliamentary election that elevated PiS to power had a turnout of just 50.9%. Higher participation could be achieved by pushing further polarisation of voters, which could hurt the left (even if it manages to overcome current divisions at all) that is needed, in turn, to flank PiS.

“We have created the best anti-PiS,” KO’s leader Grzegorz Schetyna said on the election night on October 24, a strong hint that the liberals remain faithful to negative tactics and have trouble coming up with a constructive programme. That could be another obstacle to making undecided voters swing the liberal way.

The opposition can, of course, count on PiS’ undoing itself. A taste of that came in the recent campaign, with new controversies over the judiciary reform and scaremongering people with refugees apparently backfiring on the ruling party.

An economic downturn, although unlikely to happen in just a few months, could also help the opposition. In fact, any crisis could cause a government rife with ambitious politicians like PM Mateusz Morawiecki or Justice Minister Zbigniew Ziobro to implode. The reportedly frail health of PiS' chairman Jaroslaw Kaczynski, who turns 70 in June, might also become a factor at play.

PiS’ further engaging in conflict with the EU – with some member states hinting the next budget’s funding should hinge upon Poland’s observing the rule of law – could be another blow, given the EU enjoys some 80% support in Poland.