Polish factories reel from impact of war in Ukraine 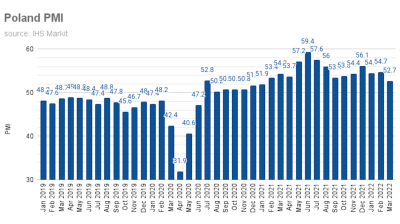 While the February reading was the 21st in a row with the index above the 50-point line separating contraction from growth, the impact of the war in Ukraine could not be clearer, IHS Markit said.

“Output and new orders both fell, whilst growth rates of employment and purchasing activity weakened,” the index’s compiler said.

“Supply shortages worsened, and both cost and charge inflation surged higher. Confidence about the future softened to its lowest for 16 months,” it added.

“Production fell for the first time in 14 months, whilst the decline in sales ended a 15-month sequence of growth. Export orders were hit to an even larger degree than at the aggregate level, with latest data indicating the steepest drop since mid-2020,” IHS Markit said.

Another impact of the war has been a severe lengthening of average lead times and yet another round of substantial cost rises faced by manufacturers.

“Rising fuel and energy costs, plus unfavourable exchange rate movements, added to manufacturers’ woes in March. Many saw little choice but to raise their own charges.”

Trends visible in the PMI survey will be reflected in the March readings based on real data from the industrial sector. The PPI is expected to continue growing fast after surging 15.9% y/y in February, which was only a very slight easing from 16.1% y/y the preceding month.

The PPI has been in double-digit territory since September, fuelling headline inflation. Polish CPI grew 10.9% y/y in March, adding as much as 1.3pp to February’s reading.

Industrial production was highly supportive of strong economic growth in the first quarter, an effect that in the short run will only be strengthened by the demand boost owing to the arrival of refugees from Ukraine.

But the medium-term outlook for the industrial sector is less optimistic in the wake of high inflation and low dynamics of real disposable income and the expected disruptions in supply chains.