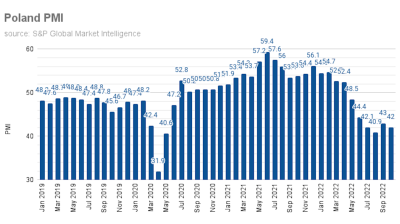 Output and new orders drove the October fall in particular. “Production fell for a sixth successive month and at a sharper, more severe rate. Firms widely indicated that widespread economic uncertainty, high inflation, and the war in Ukraine had all served to undermine sales demand,” S&P Global said.

The impact of a poor business environment was broad, with companies reducing their purchasing activity, holding up employment and carrying out layoffs. October was the fifth successive month in which employment fell.

“Firms once again responded by increasing their own charges at a historically elevated pace. Overall, prices rose at the sharpest pace recorded by the survey since July,” S&P Global noted.

The October PMI survey is at odds with the most recent real-life data from Poland’s industrial sector, which expanded 9.8% y/y in September, offering a positive surprise amidst worries of a looming economic slowdown due to the central bank’s fight with inflation and the ongoing energy crisis.

“The discrepancy between the PMI and current production readings may be partly due to the launch of greenfield foreign investments in Poland, which are not vulnerable to the decline in demand,” PKO BP said in a comment.

An economic downturn could reshuffle the Polish manufacturing market, as it is going to become increasingly difficult for companies to pass the ever-rising costs onto consumers, PKO BP also said.

“The competitive race will probably accelerate then, with companies able to become flexible on costs will push weaker and less efficient (especially energy-efficient) companies out of the market,” the Polish bank said.

Some analysts say the gap between the PMI and the actual performance of Poland’s industrial sector could even continue until the end of the year.

“The domestic industry is less dependent on natural gas supplies and is relatively more reliant on electricity, which is cheaper than in other EU countries. The PLN exchange rate [also] supports the competitiveness of Polish manufacturers,” Bank Millennium said.

“We expect the industry to support domestic GDP, which, according to our forecast, will not contract in q/q terms in Q4 2022,” Bank Millennium also said.

October industrial production data are due on October 20.

Thanks to what is shaping up to be solid first three quarters of the year, Poland is going to see its GDP expand around 4%-5% in 2022.

Expansion is then expected to ease to roughly 1%-3% in 2023, with major caveats attached to the outcome – if any – of the war in Ukraine and the long-term effects of the NBP's aggressive monetary tightening campaign.

Even with the economic slowdown possibly settling in late in 2022 or only in early 2023, Poland’s rampant inflation complicates the outlook.

That might have the National Bank of Poland (NBP) un-pause monetary tightening as soon as next week when the NBP’s rate-setters will meet, especially if the central bank’s new inflation and GDP projection – also due next week – will show an increased risk of stagflation.