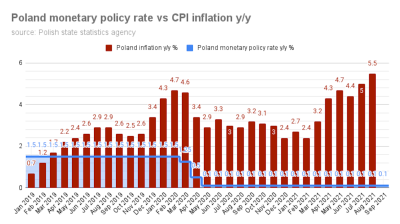 The 20-year high reading is an upward revision of the flash estimate, which GUS published in late August. As expected, the reading only heaps more pressure on the National Bank of Poland (NBP), which has long said it will only consider tightening the currently super-loose monetary policy once it is clear that the economic recovery has solidified in the wake of the coronavirus pandemic.

That may well be the case, as Poland’s GDP jumped to an all-time high of 11% y/y (following adjustment) in the second quarter. Still, the central bank’s governor Adam Glapinski continues to hint that a hike in the rates is virtually a no-go in 2021 and, possibly, would not happen before mid-2022.

But the elevated inflation is a political problem for the government, facing criticism from the opposition, which says that growing prices are impoverishing Poles. Inflation could accelerate further in early 2022 when the expected hike in energy prices for households, driven by the spiking cost of emissions from Poland’s coal-fired energy sector, will kick in.

“CPI inflation will remain above 5% y/y for at least several quarters to come. An increase of 6% y/y is possible in the first quarter of 2022, with the key factor being the scale of increases in the price of electricity,” Santander Bank Polska said in a comment.

Despite the rhetoric coming from the central bank, the persistently high inflation will eventually force it to move, some analysts say. “We assume that it will happen in the coming months – if not in November, then in one of the following months,” Santander said.

The price of fuel increased 28% y/y in August, easing only 2pp versus July, the breakdown of the data showed. Transport prices – of which fuels are a part – grew 17.8% y/y, slowing down 0.7pp versus July.

In monthly terms, CPI expanded 0.4% in August, with the growth rate slowing down 0.1pp versus July.