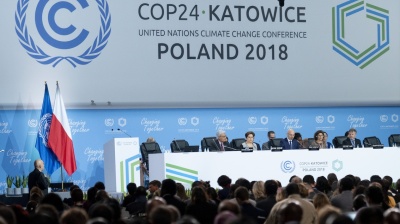 Representatives of the world’s nearly 200 countries discuss climate change in the Polish mining town of Katowice.
By Wojciech Kosc in Katowice Poland December 3, 2018

For the next two weeks, representatives of the world’s nearly 200 countries are meeting in the Polish mining town of Katowice for the United Nations’ annual climate change summit, the COP24.

The task ahead is daunting. It is to get everyone – from countries as diverse as Norway and Sudan, the US and Fiji – to agree how to implement the 2015 Paris Agreement, which set about to limit the warming of the Earth’s atmosphere to 1.5 degrees Celsius, relative to the pre-industrial era, by 2100.

The key to achieving that is reduction of carbon dioxide (CO2) emissions from burning fossil fuels, mainly coal, in industries like energy. Released into the atmosphere, CO2 traps solar radiation coming off Earth in a process commonly known as greenhouse effect.

An interim goal is to achieve zero-net emissions – in other words stop increasing the amount of CO2 in the atmosphere – by 2050.

Unfortunately for the negotiation process, cutting CO2 output is a major political issue. It has pitted the rich countries against the developing nations over the former’s historical responsibility for global warming.

The developing countries stand to suffer the most from the effects of the warming climate, such as extreme hurricanes in the Atlantic or the rising Pacific Ocean.

“Today I speak for the women in the Caribbean, for the fishermen in Kiribati,” the United Nations’ secretary general Antonio Guterres addressed the delegates, gathered in the Katowice International Congress Centre built on the site of a former coal mine.

The Caribbean is routinely getting battered by hurricanes made ever more potent by the warming climate. Pacific nations like Kiribati could disappear unless the rise in ocean levels – an effect of polar ice caps meltdown caused by rising temperatures – is contained.

But there also is a local Polish dimension to the global climate talks. The coal-dependent country’s willingness to host the summit – for a record fourth time – is a travesty for many observers, suspecting Warsaw will want to use the summit to push the agenda of agreeing on burning coal with tackling climate change.

Poland has recently drawn criticism for announcing plans to stick to coal as the main source of energy until 2030. Making coal companies partners of the summit has also raised eyebrows.

Employing some 82,000 people, mining is still an important part of Poland’s industry and economy, even though it has been fading, as evidenced by falling employment and production.

Warsaw’s bespoke political agenda during COP24 is to have the participating countries sign up to a so-called “just transition,” or moving away from coal incrementally and without job losses and societal degradation in coal regions.

Poland also proposes to use forests as “carbon sinks” to capture CO2 emissions so as to ease emissions reduction demands on industry and therefore economies. That, however, could only have a limited effect, research has shown.

“There’s no strategy today to give up on coal in Poland,” Polish President Andrzej Duda said at the summit.

For now, “coal is our strategic resource and giving it up would be difficult because it guarantees Poland energy independence,” Duda added.

Duda’s words will not go down well with advocates of a faster decarbonisation, who say climate science leaves little choice but to step up phasing out coal in Poland and globally.

Duda’s political declarations aside, the main task of the Katowice summit remains to ensure politics catches up with climate science.

There is no time for a step-by-step approach to decarbonisation, a report by the Intergovernmental Panel on Climate Change (IPCC), an international scientific body set up by the UN and the World Meteorological Organisation, said in October.

Global emissions must fall as much as 45% as early as in 2030 in order for the world to stand a chance of limiting warming to 1.5 degrees Celsius and avoid the likely catastrophic warming of 2 degrees Celsius or more.

That is nothing short of a revolution in the way energy is produced and consumed and top officials present at the COP24 have made that clear repeatedly.

But the meeting in Katowice might not deliver a key first step in the revolution: laying out a framework to execute the cut in emissions that science says must happen.

One issue is that the current international pledges to reduce emissions were inadequate in the Paris Agreement already, Manuel Pulgar-Vidal, who presided over COP20 in Lima, Peru, in 2014, said in Katowice.

Current pledges – which remain only voluntary – are only a fifth of what is needed to curb global warming at 1.5 degrees Celsius by 2100. If unchanged, they will push the world to heat by 3 degrees, a recipe for global catastrophe.

On top of that, the rise of populist leaders like Donald Trump in the US and Jair Bolsonaro in Brazil – who both say climate change is not real – have further endangered the process, even if both countries are represented in Katowice on the technical level, contributing to negotiations.

Finally, the European Union also appears divided, although that has more to do with internal tensions in the bloc than with climate policy ambitions. Beset by the finale of Brexit negotiations and the Paris riots, heavyweights like German Chancellor Angela Merkel or French President Emmanuel Macron skipped the ceremonial opening of the summit on December 3.

“Macron does not believe in the success of climate negotiations in Katowice and does not want to be associated with their possible fiasco,” a diplomatic source close to the French government said ahead of COP24, according to Polityka Insight, a Polish analytical company.

Early in the summit, however, optimism and resolve still appeared to prevail.

“The Katowice outcome is crucial for the world moving forward with global response to climate change. There’s no plan B,” President of COP24 and Poland’s Deputy Energy Minister Michal Kurtyka said.