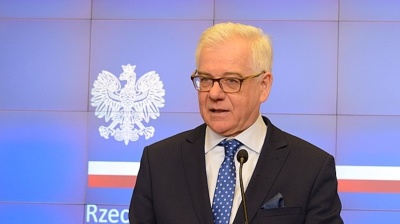 Jacek Czaputowicz surprised his EU colleagues by suggesting that there could be a time limit on the Irish backstop.
By Wojciech Kosc in Warsaw January 22, 2019

Poland’s Foreign Minister Jacek Czaputowicz surprised his EU colleagues on January 21 by suggesting that there could be a time limit on the Irish backstop so as to move the Brexit process forward.

The idea was promptly rejected by Ireland as running counter to the EU’s agreed position on the backstop. The backstop is an interim solution to ensure the UK’s leaving the European Union does not result in a hard border between Ireland and Northern Ireland.

“If Ireland turned to the EU about changing the agreement with Britain with regard to the provisions on the backstop so that it would only apply temporarily — let’s say five years — the matter would be resolved,” Czaputowicz told the Rzeczpospolita newspaper.

The Polish minister’s idea surprised Brussels as it is not in line with the EU’s position, although Warsaw under the Law and Justice (PiS) government has long been at odds with EU over a number of issues.

The proposal to limit the backstop comes, however, after the EU had agreed its Brexit position in the withdrawal agreement with the UK. The agreement was overwhelmingly rejected by the UK parliament earlier this month.

That has left the UK Prime Minister Theresa May scrambling to save the deal at home by probing the EU for possible changes to the withdrawal agreement, which Brussels seems unwilling to do.

“I made it very clear that putting a time limit on an insurance mechanism, which is what the backstop is, effectively means that it’s not a backstop at all. I don’t think that reflects EU thinking in relation to the withdrawal agreement,” the Irish Foreign Minister Simon Coveney said in Brussels, according to Reuters.