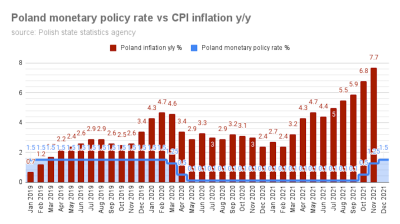 The hike was expected, with most analysts on target with predictions of how much the NBP would tighten its monetary policy amidst inflation surging to a two-decade high in November. While the pace of the tightening slowed down after the November hike of 75bp, the cycle is most likely not over yet.

“We think the backdrop of a prolonged period of above-target inflation will prompt the central bank to deliver a further 125bp of hikes, to 3%, in this cycle,” Capital Economics said in a comment.

Inflation is surging in Central Europe to a 20-year high but there is debate over whether it is caused more by internal or external factors and therefore whether it will be short and long term and to what extent it can be affected by national central banks. There is also debate as to what extent governments should now tighten fiscal policy following the increase in budget deficits to fight the effects of the COVID-19 pandemic.

The Polish central bank has been the most doveish in Central Europe and Polish rates remain one of the lowest in the region, below Czechia’s 2.25% and Hungary’s 2.1%. This has put some pressure on the zloty, with Prime Minister Mateusz Morawiecki expressing concern last month about its current weakness.

On top of macroeconomic considerations, inflation has also become a political problem for the ruling radical rightwing Law and Justice (PiS) government, which has mooted an anti-inflation package of tax cuts and cash handouts to low-income households recently, which would push up the budget deficit further and fuel further inflation.

At the same time, the NBP adopted a somewhat hawkish tone in its communiqué after the decision, saying that there existed the risk of inflation persisting above the target of 2.5%.

That could be the case due to “economic recovery and expected continuation of favourable labour market conditions, as well as probably more lasting impact of external shocks on price dynamics,” the NBP said. “In order to reduce this risk, the [NBP] decided to increase interest rates again. The increase … will also curb inflation expectations,” the central bank said.

The future pace of the tightening cycle remains unclear although the consensus is that more hikes are in the pipeline.

Ukraine will receive $5.5bn in support from the US later this month
2 hours ago
John Malkovich to turn Skopje into Hollywood of the Balkans
3 hours ago
Envoy says start made on construction of Turkish attack drone factory in Ukraine
12 hours ago
Huge explosion rocks Russian airbase on the Crimean peninsula
16 hours ago
Russia cuts oil flow via Ukraine's Druzhba pipeline, blaming sanctions for blocking transit payments
16 hours ago