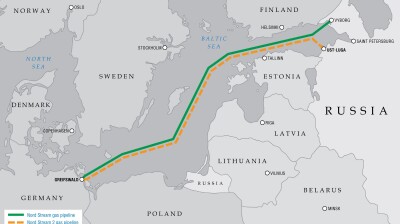 Poland's anti-monopoly committee has slapped Russia's Gazprom with a $7.6bn fine for building the Nord Stream 2 gas pipeline without its permission in a case that is headed straight for the arbitration courts / Gazprom
By bne IntelliNews October 13, 2020

What: Polish regulator UOKiK has slapped a $7.6bn fine on Gazprom for going ahead with Nord Stream 2 without its permission.

Why: Poland, a staunch opponent of Nord Stream 2, says the pipeline will have a negative effect on its gas market.

What next: Gazprom has vowed to appeal against the decision, making a lengthy arbitration case likely. But the dispute will have little bearing on Nord Stream 2's completion.

Poland and Russia look set for a lengthy and arduous legal dispute, after Polish antimonopoly watchdog UOKiK last week slapped Kremlin-run gas supplier Gazprom with a $7.6bn fine for going ahead with the Nord Stream 2 pipeline without its consent.

Poland’s efforts will have little bearing on the controversial project, however, given that UOKiK lacks jurisdiction to halt its construction, which is now almost complete. And in any case, Gazprom has vowed to appeal against the regulator’s decision, initiating an arbitration process that could take five or so years to reach a conclusion.

The crux of UOKiK’s argument is that Gazprom created a de-facto joint venture with its European partners to finance Nord Stream 2. Gazprom’s original plan was to form a consortium with Germany's Uniper and Wintershall Dea, Royal Dutch Shell, Austria's OMV and France's Engie to finance, build and operate the €9.5bn ($11.2bn) pipeline. UOKiK’s approval was needed because of Nord Stream 2’s impact on the Polish gas market. It withheld this approval in 2016, forcing Gazprom to come up with a different plan.

Instead, the Russian company was lent funds by its European partners to cover half of Nord Stream 2’s cost, but UOKiK argues that these financing agreements effectively established a joint venture in all but name. The regulator said it had imposed the maximum penalty it could on Gazprom. It has also fined the company’s European partners some PLN234mn ($62mn), representing 10% of the annual turnover of their subsidiaries involved in Nord Stream 2.

Poland is among the staunchest opponents of Nord Stream 2 and Russian influence in Europe. Polish officials argue that Nord Stream 2 will undermine competition in Poland’s gas market, and also enable Gazprom to divert gas supplies to Europe that currently flow through Poland, robbing Warsaw of billions of dollars in transit revenues. The project would also increase Europe’s dependence on Gazprom for gas, UOKiK argues.

“Such a situation may bring about serious consequences for the economy of Poland and of the EU, in particular by introducing territorial restrictions affecting the delivery of natural gas, and by increasing the prices of gas to end customers, in particular to Polish consumers,” the regulator said. “The high cost of implementing the undertaking may be offset by higher bills paid by Polish recipients of gas, and the negotiating position of ... Gazprom will be strengthened considerably both in relations with Poland and with other EU member states.”

How great an impact Nord Stream 2 would have on the Polish market is doubtful, however, given that Warsaw is striving to end its reliance on Russian gas anyway within a few years.

Poland consumed some 18.6bn cubic metres of gas last year, while it produced some 4.1 bcm domestically. A further 9 bcm was supplied by Gazprom, while the remainder was met with 3.4 bcm of LNG imports and 2.5 bcm via interconnectors with Germany, the Czech Republic and Slovakia.

Poland’s long-term contract for Russian gas is due to expire at the end of 2022, and state gas supplier PGNiG does not intend to extend it. While Poland would still be able to make spot purchases from Gazprom after the contract’s expiry, its government has insisted it will not take any Russian gas at all.

To break gas ties with Russia, Poland has a raft of projects underway that will greatly expand its gas import capacity over the coming years. It plans to launch Baltic Pipe in October 2022, a pipeline from Norway that will provide Poland with some 10 bcm of gas annually. A final investment decision (FID) on the project was taken in 2018, and early construction work is underway.

Poland also intends to enlarge its Swinoujscie LNG import terminal to take an extra 3.3 bcm per year of gas beginning in 2023, and build a second, 4.5 bcm per year terminal in Gdansk by 2026-2027. Baltic Pipe alone could be enough for Poland to cut its Russian gas supplies to zero as early as 2023, and the government wants to resell any surplus LNG it imports to Ukraine and its other neighbours.

The prospect of potentially having to pay a large fine in a few years will undermine Gazprom’s share price performance and its credit rating. But UOKiK’s actions alone will have little impact on progress at Nord Stream 2. Even so, the project faces significant other obstacles to its completion.

The pipeline’s offshore section reached 94% completion in December last year before the US imposed sanctions, forcing Swiss pipelayer Allseas to halt construction. Russia has its own pipelaying vessels on standby in northern Europe to finish the job, but it is unclear whether they have the capability to do so without international assistance. Looming over the project, a bill is making its way through US Congress that would impose even tougher sanctions.

Russian authorities say Nord Stream 2 will be ready to flow gas in early 2021. But Gazprom is stuck in a ship-or-pay contract with Ukraine until the end of 2024, meaning it will have to pay to deliver at least 40 bcm per year of gas through the country between 2021 and 2024, regardless of how much it actually sends. This will limit how much gas it is feasible for the company to supply via Nord Stream 2.

Then there is the EU regulatory headache. Nord Stream 2 will have to comply with the bloc's energy law following a court ruling last year, which could require Gazprom to provide third-party access to its capacity. It is unclear how Russia could ensure this without breaking up Gazprom’s monopoly over pipeline exports.

Lastly, Germany's support for the pipeline could crumble, not only in light of the recent assassination attempt on Russian opposition figure Alexei Navalny, but more significantly because of rising antipathy towards fossil fuels. Rather than derail the drive towards cleaner energy, the coronavirus (COVID-19) crisis has prompted governments to set more ambitious targets than ever before. This could lead Berlin to rethink its position on extra gas import capacity.

article is from Newsbase’s FSUOGM monitor, a bne IntelliNews sister company that produces weekly reports on the oil and gas sector in the former Soviet Union countries.