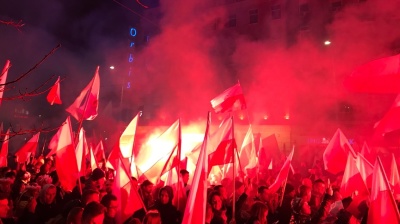 An estimated 250,000 people turned up for the biggest-ever Independence March in Poland on November 11 to celebrate the 100th anniversary of the country’s regaining sovereignty.

Following last-minute talks with the march’s organisers, the far-right organisations All-Polish Youth and the National-Radical Camp (ONR), President Andrzej Duda and other officials of the ruling Law and Justice (PiS) party led the march.

PiS thus attempted to cover up the chaos that crept into the plans for the state celebrations of the centenary, which the government had pledged would be momentous and international in scope, yet which fizzled for the most part.

In effect, while the PiS-led and the far-right parts of the march were officially separate – there was a buffer zone of a few hundred metres between them – the government is now seen as pandering to the far-right in an attempt to give the celebrations more weight.

International leaders – bar Poland’s former Prime Minister and the incumbent President of the European Council Donald Tusk, who was in Warsaw, although not for the march – gathered in Paris to celebrate the 100 years since the end of World War One.

Poland regained independence in the aftermath of the war, following 123 years of being partitioned between Prussia, Austro-Hungary, and Russia. The independent Polish state lasted 21 years until World War Two, after which it was re-established, this time as a satellite of the Soviet Union.

“I want us to walk under our white-and-red banners together and in an air of joy. To give honour to those who fought for Poland, and to be glad that it is free, sovereign and independent,” Duda said at the beginning of the event.

“Let that be a march for everyone, a march that everyone wants to attend and be comfortable marching for Poland,” the president added.

Duda walked in the front row of the march accompanied by Prime Minister Mateusz Morawiecki, PiS’ chairman Jaroslaw Kaczynski and other top officials.

But ONR, All-Polish Youth and other nationalist groups, which have organised the march each year since 2010 to make it the Polish far-right’s top event, followed the president’s group a few hundred metres behind with nationalist and fascist imagery such as Celtic crosses prominently on display.

Flags of Italian’ neo-fascist group Forza Nuova were also clearly visible. The organisers thanked them for attending the march in a Facebook post.

Unlike in the previous years there were no scuffles with the police and there were hardly any openly racist banners or chants. Some media drew attention to incidents such as burning of the EU flag or chants in honour of Janusz Walus, a far-right extremist serving life in a South African prison for assassinating Nelson Mandela’s ally Chris Hani in 1993.

The organisers also underlined the march was a grassroots undertaking of Polish nationalists and distanced themselves from PiS. The government, however, boasted about the overall turnout of the march, which it called “the biggest ever [patriotic] manifestation in Warsaw.” 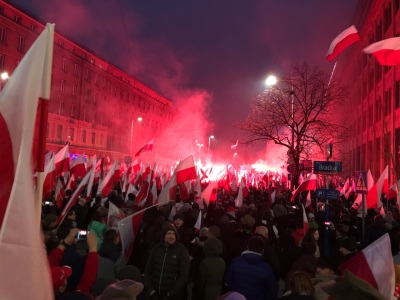 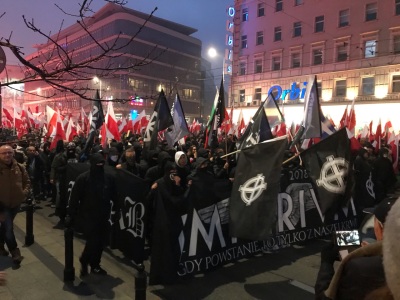