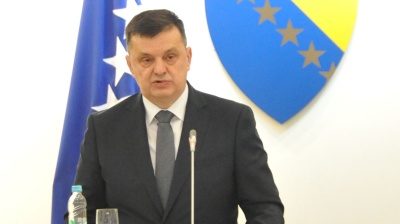 The appointment of Zoran Tegeltija as Bosnia's new state-level prime minister should open the way for progress towards EU candidate status and a new agreement with the IMF in 2020.
By bne IntelliNews January 7, 2020

After more than a year of political deadlock, the appointment of Bosnia & Herzegovina’s new state-level prime minister should open the way for progress towards EU candidate status and a new agreement with the International Monetary Fund (IMF) in 2020.

Following the October 2018 general election, Bosnian politicians were unable to agree on forming a coalition for 14 months. In December, they finally found a suitable compromise and ethnic Serb politician Zoran Tegeltija was approved as the next state-level prime minister. Tegeltija was proposed by Milorad Dodik, the Serb member of the tripartite presidency, and is a member of Dodik’s Alliance of Independent Social Democrats (SNSD).

The appointments of Tegeltija and most of his cabinet were approved in December, though the parliament is yet to approve the candidate for human rights minister at a session scheduled for January 16.

In his speech to parliament after his nomination, Tegeltija said he would implement much needed reforms to unlock the country’s EU membership path and secure a new deal with the IMF.

While the formation of a government was welcomed by Bosnia’s international partners, there are fears Tegeltija will be under the influence of his party leader, Dodik, who has repeatedly challenged the authority of the state-level power structures and talked controversially of secession for Bosnia’s Serb entity Republika Srpska.

In his speech, Tegeltija avoided talking about Bosnia’s Nato membership as this is fiercely opposed by Dodik. On the other hand, Dodik compromised somewhat to end the deadlock over appointing a prime minister, and agreed that Bosnia would send a plan for reforms to Nato as soon as Tegeltija was appointed.

Bosnia’s economy remains resilient to the persistent political instability, posting decent growth of around 3% in 2019. This trend should continue in 2020, according to international financial institutions.

The European Bank for Reconstruction and Development (EBRD) set its projection for 2020 GDP growth at 3%, but noted that risks to this forecast are related mainly to uncertainty about reforms to improve the business climate and standards of governance.

The IMF was more pessimistic, expecting economic growth to slow down to 2.6% in 2020 from an estimated 2.8% for 2019. The World Bank was significantly more optimistic, projecting the 2020 GDP growth at 3.4%.

Bosnia’s commitment to gaining EU candidate status is seen as a key reason to advance the country’s structural reform agenda. If the new government implements the required reforms, the World Bank expects a moderate acceleration in growth, with higher investment in infrastructure.

The country could also commit to reforms if it starts talks with the IMF on a new loan deal to replace the existing one, which was put on hold in 2017 as political disagreements have frozen key reforms.

Meanwhile, Bosnia’s unemployment is at its lowest level in a decade, mainly thanks to a rise in demand for labour and a likely reduction in the working-age population.

Despite the improvements in the labour market, Bosnia’s employment is still low compared to the region and, according to the World Bank, the country should address structural reforms to accelerate gains in job creation.

Due to the significant delay in the process of government formation, Bosnia will most likely begin 2020 with the same budget parameters as in the first quarter of 2019.

With agreement finally reached on the appointment of Tegeltija as Bosnia’s new prime minister, the priority of his new government will be adopting the state budget for 2020.

Raiffeisen analysts commented: “we expect that the general budget balance will persist within the surplus area of 1.0% of GDP. Political agreement on the budget at the FB&H entity level is still pending and should be reached during Q1 2020.”

In 2019, Bosnia’s two autonomous entities — the Muslim-Croat Federation and Republika Srpska — chose to issue T-bonds in 2019 to fund their deficits, placing them on local markets.

In its 2019-2021 strategy for debt management, the Federation has estimated that it will need external funding equal to $1.06bn for the three years. Considering the costs and risks, the entity has decided to continue with its policy of trying to borrow mainly from multilateral financial institutions, estimating that they could provide 62.2% of all necessary funds.

The entity has assessed that the local market for state securities is underdeveloped, but has a growth trend. Local commercial banks are the main investors in state securities.

Republika Srpska has also drafted a 2019-2021 debt management strategy, setting the focus on issuing longer-term securities. Its strategy is to diversify its sources of financing, instruments and investors. The share of external financing should decrease in favour of internal funding.

The share of non-performing loans in Bosnia & Herzegovina has been declining constantly and was below 9% in 2019. However, it remained nearly three times its pre-crisis level of 3% at end-2008, weighing on lending activity and banking sector profitability. The International Monetary Fund (IMF) has required that Bosnia modernise its banking legislation, strengthen cooperation among the financial sector agencies and address the high level of NPLs.

So far, the country has not taken any measures in that direction. However, as Tegeltija has finally been appointed as prime minister, legislative changes could follow in 2020.

As of end-September, bank assets increased by 7.9% y/y to BAM32.81bn. The growth of Bosnia’s bank assets was due mainly to an increase in loans, which accounted for 62.3% of total bank assets in September. Loans accelerated by 5.7% y/y to BAM20.44bn, after rising by 5% y/y in August.