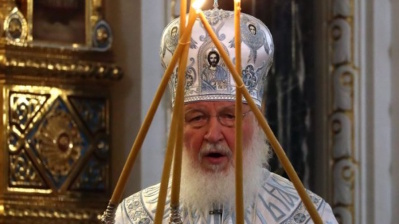 Patriach Kirill is considered a long-time ally of President Vladimir Putin and has become one of the main supporters of Russian military aggression against Ukraine.
By bne IntelliNews June 2, 2022

Hungary has continued to block approval of the sixth package of sanctions against Russia, this time over the inclusion of the head of the Russian Orthodox Church, Patriarch Kirill.

Prime Minister Viktor Orban's repeated and prolonged use of Hungary's veto demonstrates that the radical rightwing leader is determined to use his re-election in a flawed poll last month as justification for being even more intransigent with the EU, even when that includes protecting Russian President Vladimir Putin, a close ally. Orban's stance has put the EU in a dilemma over whether to give in to the semi-authoritarian premier or double down, leading to paralysis in the EU council and potentially pushing Hungary towards the EU exit.

EU leaders agreed in principle on Monday to impose an embargo on Russian oil by the end of the year and the sanctions against Russia were due to be finalised on Wednesday at a meeting of ambassadors before being published in the EU's official journal for entry into force, but Budapest has not yet given its approval.

Orban and his cabinet members have previously spoken out against targeting the Russian religious leader "Hungary will not support putting church leaders on a sanctions list. This affects the issue of religious freedom for communities in Hungary and this is sacrosanct," said Orban, who has more and more depicted himself as a defender of Christianity against Islam and Western muliticulturalism.

Kirill is considered a long-time ally of President Vladimir Putin and has become one of the main supporters of Russian military aggression against Ukraine.

The government did not comment on the press reports.

"Orban protects Patriarch Kirill from being sanctioned by the EU. Kirill blesses the war crimes the Russian dictator orders in Ukraine. Shame on you! One day the kompromat by which the Russians keep you compliant will be revealed. What an embarrassment for freedom-loving Hungary," tweeted Michael Gahler, foreign affairs spokesperson of the European People's Party.

The Hungarian government has opposed a sweeping oil embargo from the start as the landlocked country gets close to two-thirds of its oil from Russia via pipeline, and the country's main refinery is technically reliant on Russian crude.

Budapest warned that the ban on Russian oil would deliver a price shock to the country’s households and economy.

Hungary has no secure physical alternative to Russian oil supplies in the foreseeable future, State Secretary for International Communications and Relations Zoltan Kovacs told CNN and BBC on June 1.

He said the "golden rule" was that Europe should not impose sanctions that hurt them more than they would hurt Russia.